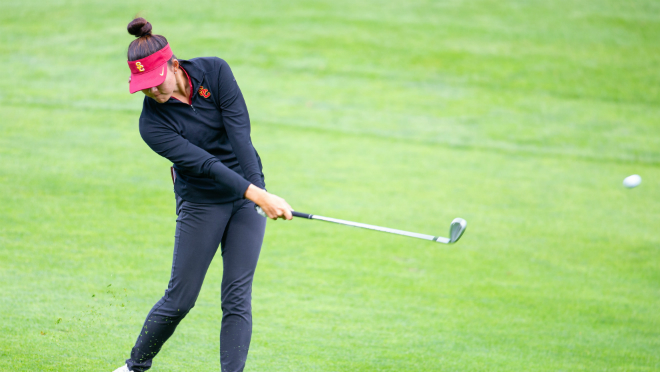 RED DEER, Alta. – Jennifer Chang of Cary, N.C., vaulted herself into the lead in the second round of the 106th Canadian Women’s Amateur Championship held at Red Deer Golf & Country Club in Red Deer, Alta.

Chang moved atop the leaderboard with a round of 5 under 67, the lowest score in the second round and her second consecutive round in the 60s. The No. 13-ranked player on the World Amateur Golf Ranking, Chang was bogey-free on Wednesday, leaving her at 8 under for the tournament.

“I thought I played pretty well [yesterday] at 3 under and today I really took it up a notch,” said Chang. “The wind blows pretty hard, so I’m just going to do the same thing each and every day and take it one shot at a time.”

.@jenniferchang99 taking it one shot at a time ⛳️🙌🏼 pic.twitter.com/UgULT7gg91

Andrea Lee (Hermosa Beach, Calif.) sits in second place, one stroke behind Chang. The No. 2-ranked golfer on the World Amateur Golf Ranking made back-to-back birdies on the par-5 No. 4 and the par-3 No. 5, finishing the second round at 1 under.

Brianna Navarrosa of San Diego, Calif., sits in third at 4 under, having shot even-par in the second round.

After sharing the first-round lead with Lee, Zoe Campos (Valencia, Calif.) carded a round of three over, falling into a tie for fourth with Min A Yoon (Republic of Korea) and Emilee Hoffman (Folsom, Calif.), five shots back of Chang.

Michelle Liu is the low Canadian after 36 holes. The 12-year-old Vancouver product fired a bogey-free round, sinking two birdies to bring her score to 2 under, good for a tie for seventh position.

Seventy-two players have advanced to the final two rounds of the championship. The first groups will tee off Thursday at 7:30 a.m. from holes No. 1 and No. 10.

Congrats to @thegolfontario squad for winning the inter-provincial title at the Canadian Women’s Amateur #CDNWAm 👍🏼👍🏼 pic.twitter.com/AuVXGhM1pt

This is Ontario’s first time winning the Inter-Provincial competition since 2014 and their 39th time claiming the team championship since it was inaugurated in 1947.

Play was suspended for 71 minutes, resuming at 4:30 p.m., due to inclement weather.