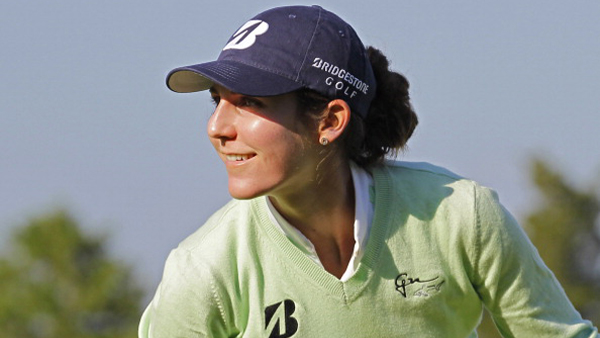 GALLOWAY TOWNSHIP, N.J. – Jennifer Johnson matched the course record with a 9-under 62 on Friday to take the first-round lead in the ShopRite LPGA Classic.

The 22-year-old Johnson, the winner last year in Mobile, Alabama, had 10 birdies – five straight on Nos. 9-13 – and a bogey on the Bay Course at Stockton Seaview Hotel and Golf Club.

“I’ve been playing well the past few weeks, so I felt pretty good about my game,” Johnson said. “If you just let it happen and just let a good round come together, normally it does.”

Haru Nomura had a bogey-free 63, and Christina Kim opened with a 64.

But they’re all chasing Johnson, who matched the record set by Laura Davies and Jimin Kang in 2005.

Johnson had a shot a 63 on the course two years ago.

“On 17, that’s when I was 8 under and I was trying to beat my 63,” Johnson said. “So then I started getting a little nervous because my goal was to get to 10 under, but I only got to 9. But when you shoot something that you’ve never shot before, nerves are going to happen.”

Nomura had eight birdies in her career-low round.

“All in all, my putting was on, my shot was really good and the conditions were great,” Nomura said. “So everything was perfect today.”

Kim finished with seven birdies, including a 35-foot putt on 11 that she called “one of the longest putts I’ve made since the 90s.”

Park, winless this season, had five birdies a week after missing the cut in Alabama to end her streak at 22 events.

Focusing on not letting her shoulder dip down too much, which she said caused her putts to veer to the left last week, Park drained a 15-foot birdie putt on the first hole.

For Park, ranked No. 1 for 59 straight weeks, that was all she needed to get back on track.

“I was a little bit worried before I teed off today because of last week’s finish,” Park said. “But after I birdied the first hole, that really gave me a lot of confidence going into the rest of the 17 holes.”

Choi closed her round with an eagle on the par-5 ninth. She said she felt “good vibes” all day after watching Rory McIlroy shoot a 9-under 63 at the Memorial Tournament on Thursday.

Choi’s swing coach, Robin Symes, and caddie, David Jones, are both friendly with McIlroy, which has turned Choi into a big fan of the PGA Tour star.

“I’ve heard a lot of good stories about him,” Choi said. “I’ve never met him but it feels like we are good friends with each other. And hopefully one day I will see him and meet him.”

Second-ranked Stacy Lewis and Michelle Wie shot 67, and 17-year-old Lydia Ko was another stroke back. Wie, who has seven top-10 finishes in 10 events this year, finished with five birdies but was disappointed that only one of them came on a par 5.

Hall of Famer Karrie Webb, the winner last year, opened with a 69.

Jennifer Kirby, of the Young Pro Squad development team opened the tournament on a high note carding a 67 to tie for 6th.