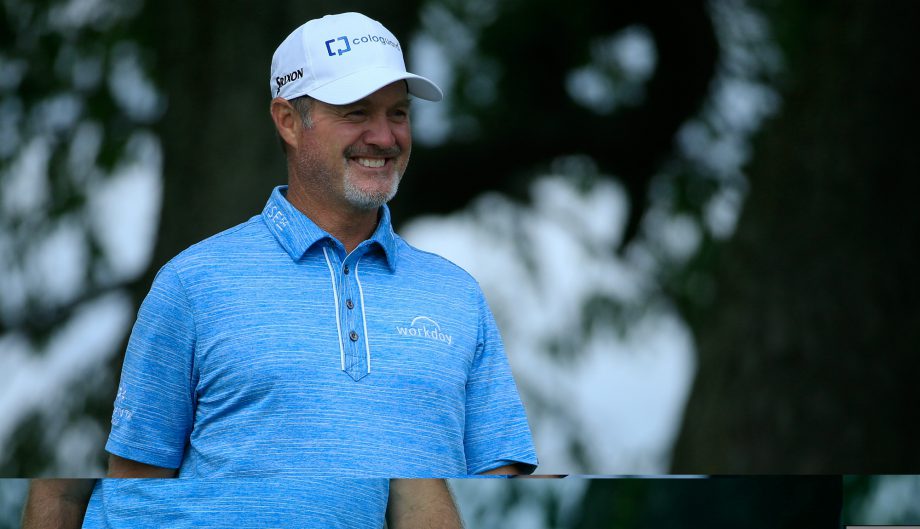 Kelly closed with a 3-under 68 in chilly, rainy conditions for a one-stroke victory over Janzen on Bear Mountain’s Mountain Course. The three-time PGA Tour winner won the Boeing Classic outside Seattle last month for his first senior title.

“You always want that validation after you win the first one,” Kelly said. “And to get it so soon, again, very surprised, but I’m just going to keep working hard.”

Janzen also shot 68, but dropped three late strokes to give away the lead. After making three birdies in a row, he bogeyed the par-4 15th and made a double bogey on the par-4 17th. On 17, the two-time U.S. Open champion drove into a bush, chipped back to the fairway and three-putted after his ball ran to the back of the green.

“Where that pin was, it’s so difficult to get it near the hole and I just made a huge error by hitting on the wrong line,” Janzen said. “Unfortunately, I just didn’t know any better. … It would have saved myself one shot, maybe two, and that’s the difference.”

The 50-year-old Kelly rebounded from a bogey on the par-5 13th with a birdie on the 15th – making the putt after being stung by a bee – and finished with three straight pars.

“It was really thinking your way around and I made a couple good saves and a couple good birdies at the end,” Kelly said. “It was more of a survival day.”

Kelly finished at 14-under 199. He began the round a stroke behind leaders McKenzie and Jerry Smith.

“The funny thing is I switched irons and won in Seattle and played well the week after in Calgary, and it’s just continued on here,” Kelly said. “Some of those changes, things click and next thing you know you’re playing with confidence and get some wins.”

Janzen missed a chance for his second senior title after winning eight times on the PGA Tour.

“When I look back at a tournament, I’m more concerned with my mental preparation and execution and where I went wrong,” Janzen said. “My psyche’s not damaged over that. Stupid things happen on the golf course all the time. It’s not the first time I’ve hit a bad shot with a chance to win a tournament, so I’m not worried. I’m getting to go to Pebble Beach, one of my favourite places in the world, and I’m really encouraged because my game stunk a week ago.”

McKenzie, the Australian trying to become the first qualifier to win since 2012, dropped back with double bogeys on the par-3 14th and the 17th. He birdied the par-5 18th for a 71 that left him tied for third at 12 under with Tommy Armour III (67).

Smith had a 75 to finish six strokes back.