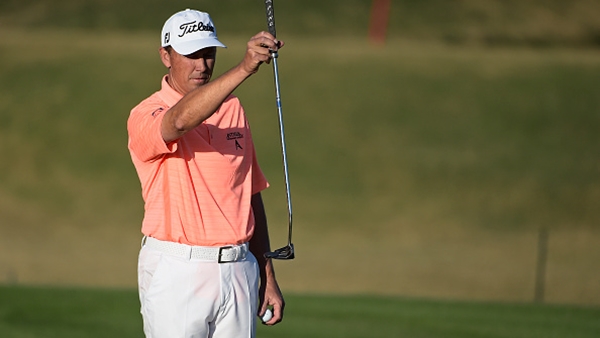 TUCSON, Ariz. – Jerry Smith had a hole-in-one and shot a 7-under 65 on Friday to take the first-round lead in the Champions Tour’s inaugural Tucson Conquistadores Classic.

The 50-year-old Smith used a 5-iron on the 212-yard seventh hole – his 16th hole of the day – on Tucson National’s Catalina Course.

“I hit a 5 and cut it just a little bit back into the wind,” Smith said. “I think that hole played 212, but just wanted to fly to about 195, maybe. In the air, it did look really good. I really didn’t have any belief that it could go in for a one, but once it hit the green, it started rolling back there. A lot of friends that were following around were up at the green and they kind of gave the old cheer and I did see it disappear.”

“I can’t be happier, obviously, for the way it turned out,” Smith said. “Just kind of got the right bounces and stayed out of trouble and I really did putt well the entire day.

Kirk Triplett, the winner of the PGA Tour’s final Tucson Open in 2006 at Tucson National, was three strokes back at 68 along with Bart Bryant and Corey Pavin. Bryant is coming off a playoff loss to Lee Janzen last month in Naples, Florida.

“I thought it was fantastic, I really did, and it proves that this area is in need of professional golf,” Montgomerie said. “It’s a shame that the Tucson Open has gone off the PGA Tour. I think it’s fantastic that the crowds are more like a PGA Tour event than anything else, never mind a Champions Tour event. All credit to everybody for putting this together on short notice.”

Bernhard Langer opened with a 69, so did Canada’s Stephen Ames.

Jesper Parnevik had a 71 in his Champions Tour debut. The five-time PGA Tour winner turned 50 on March 7. He missed the cut two weeks ago in the PGA Tour’s Puerto Rico Open after injuring his back in a fall during a practice round.

Fred Couples and Tom Lehman shot 72, and Tom Watson had a 76.

Based in Scottsdale, Smith earned fully exempt status on the 50-and-over tour in November with a tie for third at Q-school. He won the Asian Tour’s 1998 Guam Open and made 153 PGA Tour starts.

“Things have gone as well as I really could have expected this year,” Smith said. “It’s not like I’ve been doing anything different or working harder or working out or anything special. Just really been trying to focus on doing some of the same things just over and over every day, whether it’s with my putting or my routine with my full swings.”