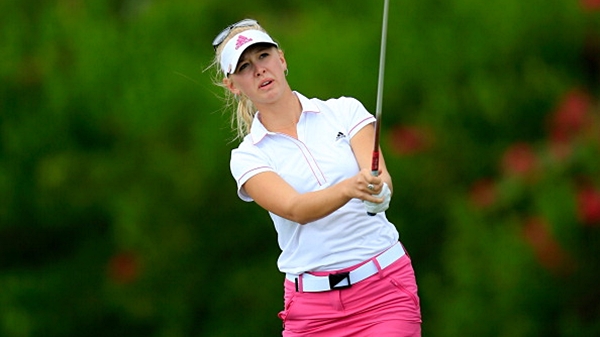 PARADISE ISLAND, Bahamas (AP) – Jessica Korda took the second-round lead in the season-opening Bahamas LPGA Classic, birdieing four of her last seven holes in high wind Friday for a 7-under 66.

The 20-year-old Korda had an 11-under 135 total on Atlantis Resort’s Ocean Club course.

“We went from beautiful, sunny, slight wind to cloudy and hurricane wind,” Korda said. “It was a tough day out there. I mean, a little mentally draining because you really had to put everything into every shot.”

The 2012 Women’s Australian Open winner for her lone LPGA Tour title, Korda recently started working with swing coach Grant Price. She struggled with her swing last year and felt that it led to some injuries in her left shoulder and wrist.

“It was just time for a change,” Korda said. “There was just stuff that wasn’t working. I’ve worked with (Grant) before, so I was really comfortable going into it, and he’s just super positive, and that’s something that I really needed coming into this year.

“We’re just working on keeping everything in plane and keeping it really simple to where if something does go wrong on the golf course, I can fix it myself.”

Paula Creamer, playing alongside Korda, was a stroke back after a 65.

“Feeding off Paula was good,” Korda said. “She made four birdies in a row after (starting with a double bogey), and it wasn’t like she wasn’t giving herself opportunities. It was birdie after birdie. It was awesome to play with somebody like that because they really do push you and keep making you try harder.”

Creamer drove left on the first hole and three-putted from 7 feet. She birdied 10 of the last 17 holes.

“After that, I said, `Let’s go make some birdies.’ And I did,” said Creamer, winless since the 2010 U.S. Women’s Open. “I love playing in windy conditions. I always have. The more difficult, the better. You have to be kind of a feel player out in these kind of situations and trust what you’re doing and committing to your shots, and that’s something that I really worked hard on in the offseason and it paid off today.”

Michelle Wie and Monday qualifier Jenny Suh were tied for third at 9 under. Wie had a 65, and Suh shot 66.

Wie had 28 putts in her bogey-free round.

“I think I just had a good rest this offseason,” Wie said. “When I came back in January and I picked up my golf clubs, I was really excited to play. I was so ready to get back into a rhythm.”

Suh failed to gain fully exempt status on the tour when she lost a playoff at Q-school.

“I know what the weekend could do and what it could hold for me, but I’m just going to keep enjoying myself and try to make as many birdies as possible,” Suh said.

Lydia Ko, the 16-year-old New Zealander who shared the first-round lead with Meena Lee, was three strokes behind at 8 under after a 70. The fourth-ranked Ko is making her first start as an LPGA Tour member. She won the Canadian Women’s Open the last two years as an amateur and closed last season with a victory in a non-tour event in Taiwan in her second pro start.

Third-ranked Stacy Lewis was 6 under after a 71.

On the Canadian front, Toronto’s Rebecca Lee-Bentham and Alena Sharp of Hamilton were the lone Canadians to make the 36-hole cut. The pair both sit at 2-under and are tied for 35th.

Jennifer Kirby failed to make the cut in her debut as a LPGA Tour member. The former Team Canada member and Paris, Ont. native finished 2-over to miss the cut by a stroke.

Maude Aimee-LeBlanc of Sherbrooke, Que. finished 1-stroke back of Kirby at 3-over, while Langley’s Sue Kim was 11-over.