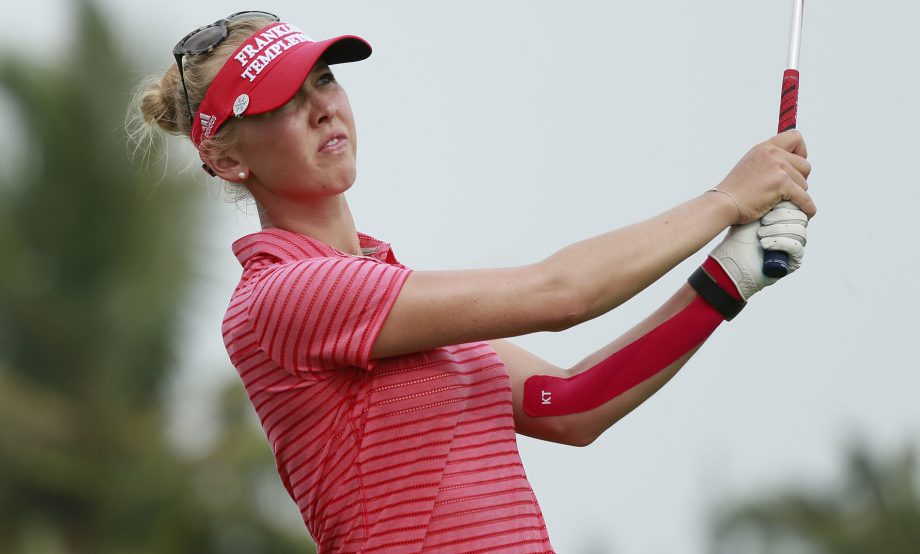 HAINAN, China – Jessica Korda caught Minjee Lee on Saturday in the Blue Bay LPGA. Ariya Jutanugarn made up even more ground to move into contention for her sixth victory of the season.

Korda shot a 6-under 66 at Jian Lake to make up seven strokes on Lee for a share of the lead, and Jutanugarn had a 65 to cut her deficit from eight to two shots and get in the final group Sunday.

In hot and mostly calm conditions four days after Typhoon Sarika hit the South China Sea beach resort, Korda had five birdies in a six-hole stretch and got up-and-down for another on the par-5 18th.

“I missed a lot of birdie opportunities at the beginning and I was just saying in my head, ‘Stay patient.’ and, ‘Stay positive,”’ the 23-year-old American said. “Yesterday, I was 4 over through seven and then battled back to shoot even par. I was really proud of myself to keep myself in it. I just knew that I can make birdies out here.”

Lee had a 73, also getting up-and-down for birdie on 18 to match Korda at 11-under 205. The 20-year-old Australian began the day six strokes ahead of Germany’s Caroline Masson after shooting 65-67 the first two rounds.

“It wasn’t that windy today, so I guess you could be a bit more aggressive at the pins,” Lee said. “I wasn’t striking it that well, so I think I just got by making up-and-down.”

The second-ranked Jutanugarn had the best round of the day on the course with difficult to hit valleys and plateaus on the large greens.

“This course, you have to be really patient,” Jutanugarn said. “I just be like waiting for birdies, not really rushing trying to make birdies. Just trying to have fun.”

The 20-year-old Thai star leads the tour in victories and tops the player of the year points race.

Korda hit an 8-iron to 6 inches on the 141-yard seventh to start the birdie spree.

“I actually thought it was going to go in,” said Korda, set to defend the last of her four LPGA Tour titles next week in Malaysia.

“You have to land it perfectly at the top to have any shot at that pin staying on the back of the green,” Korda said. “It’s really wet back there so you don’t want to have to chip up. It’s not an easy chip. I was just really happy to be on the green to be honest with you and have some type of putt at it.”

She has played 20 holes without a bogey. She made a key 6-foot par save on the par-4 sixth.

Lee got on the wrong side of the ridges on 11 and 12, three-putting for bogeys – after Korda birdied both in the group ahead – to drop into a tie.

“I think the girls did pretty well considering where the pins were today,” said Lee, the winner last year at Kingsmill and in April in Hawaii.

Michelle Wie (71) was tied for seventh at 3 under. She has only one top-25 finish this year, a tie for 25th in February in the second event of the season, and needed a sponsor exemption to get in the event.

Brooke Henderson (70) was another stroke back. The 19-year-old Canadian birdied three of last five holes. She’s playing for the fourth straight week in Asia and plans to make it six in a row.