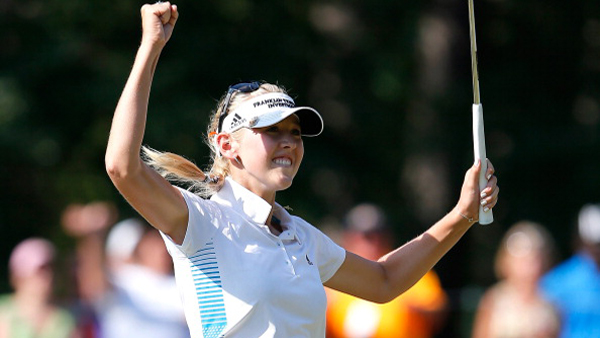 MOBILE, Ala. – Jessica Korda won her first LPGA Tour title two years in Australia and opened this season with another victory in the Bahamas. On Sunday, the 21-year-old Florida got one on her home turf with a back-nine charge in the Airbus LPGA Classic.

“It’s very sweet,” Korda said. “Finally on U.S. soil and somewhat close to Florida. I definitely wish that I could have at least shared it with my parents, but I know that they’re watching. My brother’s playing a tennis tournament right now and my sister’s trying for a U.S. Open qualifier, so we’re kind of scattered all over the place, but I can’t wait to go home and share this with them.”

Korda, whose father, Petr, won the 1998 Australian Open tennis tournament and mother, Regina Raichrtova, also played pro tennis, birdied four of the final five holes, making a breaking 15-foot birdie putt on the par-4 18th for a 7-under 65 and a one-stroke victory over Anna Nordqvist.

Korda played the back nine in 6-under 30 to finish at 20-under 268 on The Crossings course at the Robert Trent Jones Golf Trail’s Magnolia Grove complex.

“It just sets up great for my game,” said Korda, who shot 20 under in this event last year and tied for second. “I can be aggressive. I can read the greens. My confidence just was rising every single day. I just love it here. I love Alabama, I love this golf course, and hopefully we’ll have this tournament for a very, very long time.”

Nordqvist also birdied the 18th and finished with a 69.

Michelle Wie, 18-year-old Charley Hull and 44-year-old Catriona Matthew tied for third at 18 under. Wie and Hull shot 67, and Matthew had a 69.

Wie played alongside Korda and Hull.

“I love playing with Korda,” Wie said. “It’s also really great playing with Charley as well, too. You feel old but it was a lot of fun.”

Wie, the winner last month in Hawaii, has seven top-10 finishes in 10 starts this year.

Korda started the day three strokes behind 54-hole leader Nordqvist and managed only one birdie on the front nine.

“Yesterday was a little frustrating because I was always around the hole and same thing actually on the front nine, watching Michelle make putt after putt after putt and mine were just kind of missing,” Korda said. “I was like, OK, it’s time to drop now. Then they started dropping on the back nine. It was a really relaxed day, so I really enjoyed the walk.”

She birdied Nos. 10 and 12 to join a six-way tie for the lead, with three more players just one shot off the pace in the birdie-fest.

Korda broke out of that logjam with a curling downhill birdie putt at the 14th hole, then took the lead for good with a 25-foot birdie on No. 15.

She protected that small lead with a birdie at the par-5 16th and her closing birdie on the 18th.

“That last putt broke really hard,” Korda said. “I probably played it about a yard out and I was just trying to get it down there close and it went in. I have not played well since I won in the Bahamas but I’ve been working hard and it finally paid off here.”

Second-ranked Stacy Lewis had a 71 to tie for 10th at 15 under. She needed a solo third or higher to take the top spot in the world from Inbee Park.

Young Pro Squad Member, Jennifer Kirby, shoots 70 in the final round to end the Airbus LPGA Classic tied for 43rd.