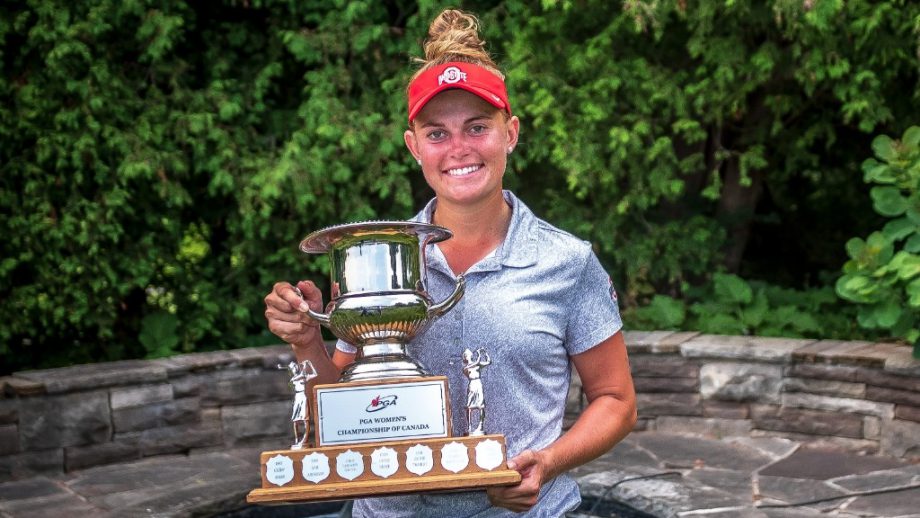 THORNHILL,  Ont. —Until today, Jessica Porvasnik hadn’t won a professional golf championship outside the state of Ohio. Now, however, the 23-year-old American can call herself national championship winner.

Porvasnik captured the DCM PGA Women’s Championship of Canada Thursday at the Ladies’ Golf Club of Toronto, finishing the 36-hole event at 4-under-par, 140.

“I’ve won two professional events in Ohio, but this is my first win outside of the state,” Provasnik said. “There are some pretty impressive names on the trophy, so to win this championship is very special to me.”

With the win, Provasnik takes home the first place prize of $10,000 and an exemption into this year’s CP Women’s Open at Wascana Country Club in Regina, Aug. 20-26.

Aram Choi of Surrey, B.C., and Mexico’s Sandra Angulo finished T2, one shot back at 3-under-par.

Hamilton Golf & Country Club’s Emma De Groot finished fourth at 2-under-par for the championship. With her impressive finish, she takes home the low PGA of Canada club professional division title, along with a spot on the PGA of Canada’s PGA Cup team.

The PGA of America recently formed the Women’s PGA Cup, a first-of-its-kind team competition for Women PGA members from around the world. The PGA of Canada is pleased to be taking part in this landmark event, which will be played October 21-26, 2019 in the United States.

American Jenny Lee, Valerie Tanguay and Ladies’ Golf Club of Toronto member Elizabeth Tong round out the top-five at 1-over-par.

Earlier in the week, title sponsor DCM announced the  ‘Power Up’ initiative.

More information about the Power Up initiative will be announced in the coming weeks.

The next PGA of Canada national championship takes place at the Beverly Golf & Country Club, Aug. 7-10 for the PGA Seniors’ Championship of Canada.