Jim Clark: A champion of volunteers 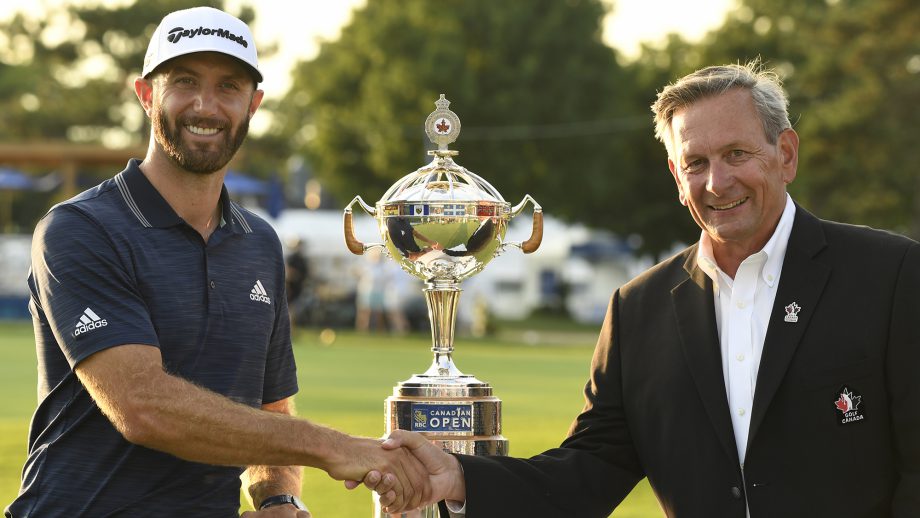 It was a tweet that echoed ‘round the world.

“Leaving @RBCCanadianOpen after 34 tournaments and 11 as Tournament Chair. Melancholy moment thinking about all the memories of Glen Abbey. To @TheGolfCanada, thanks for all the wonderful experiences and friendships made.”

The author was Jim Clark (@cognashene for those of you on Twitter) and the accompanying photo showed him beside the RBC Canadian Open trophy as the sun set on this year’s championship on July 29.

Leaving ⁦@RBCCanadianOpen⁩ after 34 tournaments and 11 as Tournament Chair. Melancholy moment thinking about all the memories of Glen Abbey. To ⁦@TheGolfCanada⁩ Thanks for all of the wonderful experiences and friendships made. pic.twitter.com/qHpCxBcykY

Clark, 61, has been involved as a volunteer in our national men’s Open since 1984 when he joined the Caddies and Juniors Committee. The eventual progression took him through that and other committees until he was chosen to be the Tournament Chair at the 2002 championship at Angus Glen Golf Club in Markham, Ont.

In 1984, Bill Paul was Golf Canada’s assistant tournament director, working under the legendary Richard “Dick” Grimm. Paul, now the organization’s director of professional tournaments, says Clark had a rare combination of qualities that made him the ideal volunteer.

“Jim was always interested in all areas of the tournament and was always trying to find ways to do things better. He was never satisfied with the status quo. He has a great personality, friendly and approachable. He listens to others and if he has an opinion, he explains it in a reasoned way.

It’s that last statement that will resonate most with Clark, without a doubt, because it echoes one of the many legacies of the late Dick Grimm, often referred to as “Mr. Canadian Open.”

Clark recalls the first time he saw Grimm. “I saw this large man lumbering through the parking lot and I asked, ‘Who’s that?’ ‘That’s Mr. Grimm,’ I was told. ‘He runs the place.’ He looked pretty intimidating, larger than life.”

But It didn’t take long for the two to become fast friends and for Clark to put his heart and soul behind one of Grimm’s core mantras.

“Look after the volunteers,” Clark says, doing a passable impression of Grimm’s gravelly baritone. “I can hear him saying that like it was this morning.”

According to Paul, Grimm would have been proud of how Clark carried out that legacy. Increasingly, the essential role of the volunteer (there were about 1,500 at this year’s RBC Canadian Open) can be overlooked, overtaken by the attention given to the necessary infrastructure, media, corporate presence, logistical realities and more.

Special thanks to over 1,500 volunteers that help make the #RBCCO a success

“You just don’t see what we had with Jim much in pro golf anymore,” says Paul. “He made it his mission to maintain Dick’s legacy of ‘the volunteer is king.’ In many ways, Jim was the man for the people, so to speak.”

Especially when the RBC Canadian Open is held at Glen Abbey, the role of the Golf Canada tournament chair is integral to the success of the event. Countless hours are devoted to finding the right people for the right roles for the more than 20 volunteer committees required to conduct the championship.

Once the planning is taken care of, then comes tournament week with its 18-hour days. But, says Clark, he would return to his “real job” in the computer industry on the Monday following the Open feeling “energized and exhilarated. It was such a great contrast to the other 51 weeks of the year, being around the best golfers in the world and some of the finest people I’ve ever met.”

When reflecting on some of the highlights, Clark harks back to the era of Jack Nicklaus (“my all-time favourite golfer”), Lee Trevino, Nick Price and their peers. “Guys like Price would duck into the caddie trailer to get out of the public eye, grab a beer, put their feet up on the cooler and just talk. Pretty cool.”

Being inside the ropes on the 18th green at the 2000 RBC Canadian Open when Tiger hit that astounding shot on the 72nd hole was another great memory but four years later came one of the most unfortunate.

“I have to say the sadness of when Mike Weir lost in the playoff to Vijay will never go away. It was really heartbreaking.”

From the expression on his face in that July 29 photo, you can tell Clark was experiencing a bittersweet moment. And of his possible return to the volunteer ranks, as he says about the chances of the RBC Canadian Open returning to Glen Abbey, “never say never.”

With the 2019 CP Women’s Open coming up at Magna Golf Club near his Aurora, Ont., home, Clark, who remains a member of Golf Canada’s Governors Council, is “just a phone call away,” says Paul.