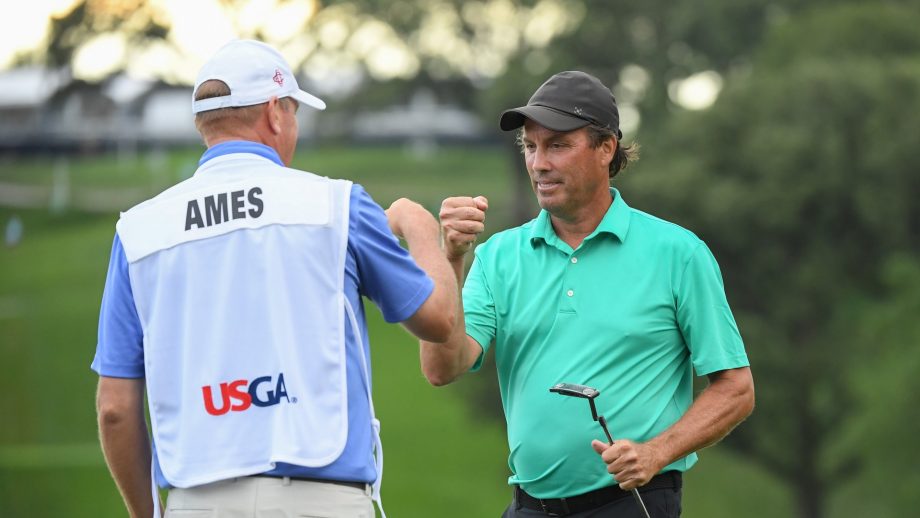 The 51-year-old took a four-shot lead into the final round of the U.S. Senior Open after shooting a 4-under 66 on Saturday to get to 8-under 202 at Omaha Country Club.

First-round co-leader Stephen Ames birdied three of the last five holes for a 68, bouncing back from a 73 on Friday, and will be paired with Furyk on Sunday.

Retief Goosen closed with two birdies, shot 66 and was alone at 3 under.

The biggest mover was Steve Flesch. The part-time television analyst shot the best round of the day with a 64 and was at 2 under. Past Masters champions Fred Couples (69) and Mike Weir (68) were in a group with Wes Short Jr. (68) and Kevin Sutherland (69) at 1 under.

Tee times were pushed back three hours after an overnight storm with straight-line wind of 90 mph knocked over camera towers and downed trees.

Furyk birdied the par-4 fourth and par-3 fifth and, as thunder rumbled, tapped in for par on the par-5 sixth before the horn sounded to signal the stoppage of play.

About an inch of rain fell during the three-hour delay, and workers who cleared brush off the course in the morning used squeegees and blowers to get standing water off fairways and greens.

Furyk, who won the U.S. Open in 2003, hit the first six greens in regulation and then went into grinding mode. He hit only two greens while playing the first six holes following the delay in 1-over par.

He closed with birdies on three of the last six holes, hitting his approach to 4 feet on the par-4 18th and making the putt to extend his lead.

Ames bogeyed two of the last three holes on the front nine and then got a hot putter and shot 4-under 32 on the back to put himself in contention again.

All he did to start making putts was stand a bit closer to the ball.

“All of a sudden my eyes felt better, my stroke felt easier and more free, and I started hitting the pace right, which is what I was struggling with,” Ames said. “I hit some real quality putts coming down the end there, so that right there alone is going to make my dinner taste a lot better tonight.”

Goosen, who won U.S. Opens in 2001 and 2004, had five birdies against one bogey. His biggest disappointment was a three-putt for par on the 313-yard 13th after he drove the green.

“My expectations were really low in the beginning of the week,” Goosen said. “I was hitting it so bad the last few weeks, and I was trying everything. I just decided to stick with something, and as the week got on, I started hitting it better and better. My confidence is coming back a little.”

Flesch flirted with missing the cut for a third straight U.S. Senior Open but rallied with a couple late birdies Friday and was among the first to tee off Saturday.

Flesch bogeyed his second hole, the par-3 11th, and then went flag hunting on receptive greens and birdied seven of the next 13.

He said he was proudest of parring the 434-yard ninth, his final hole. He drove into 4-inch-high rough, chopped the ball out and got up and down from 85 yards.

“I haven’t had much luck in U.S. Opens or U.S. Senior Opens, for that matter,” he said. “But it’s fun to contend, and I really have nothing to lose, and that’s kind of how I played today. I imagine I’ll kind of play the same way tomorrow and just enjoy it.”

Flesch said he’s savoring the experience because his college-age son, Griffin, has been carrying his bag while his regular caddie recovers from back surgery.