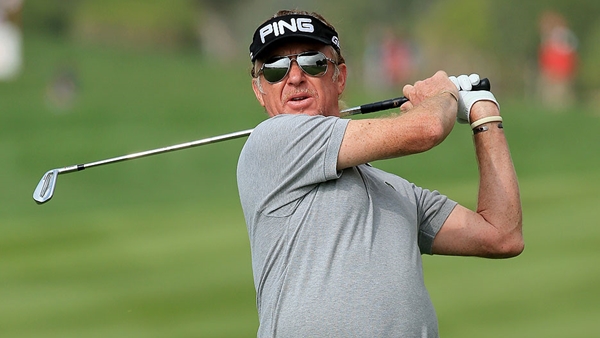 Jimenez held off Bernhard Langer to win the Greater Gwinnett Championship on Sunday, becoming only the third player to lead from start to finish in his debut on the 50-and-over tour.

Jimenez, coming off a fourth-place finish in the Masters, closed with a 67 to finish two strokes ahead of Langer. Jimenez finished the tournament with 32 consecutive holes without a bogey at TPC Sugarloaf.

The Spaniard said he can’t make a commitment to the Champions Tour this year because his goal is making the European Ryder Cup team.

“To me it’s not about money,” Jimenez said. “It’s about some different goals to make me feel proud of myself. To me I would feel nice to play on the Ryder Cup once more.”

Langer, the defending champion, shot his third-straight 68. Jimenez and Langer were tied at 10 under before a two-shot swing on No. 8. Jimenez needed only a short putt for a birdie, and Langer fell two strokes behind with his bogey.

After that, Jimenez avoided mistakes down the stretch, leaving no opening for Langer or Jay Haas, who shot 67 and was third, four shots off the lead.

“When you hit the ball straight and you put the ball close to the hole it looks easy, but nothing is easy,” he said. “You need to keep calm yourself. … I like to feel the pressure and … the people that are coming behind bite me.”

Langer said his inability to make birdie putts kept him from putting pressure on Jimenez.

“I had a number of opportunities, just couldn’t make any putts today,” Langer said. “And he played very, very solid all day.”

Jimenez stretched his lead to three strokes before he showed that on this day even his mistakes brought no harm. He hit his tee shot on No. 15 into a tree – but it bounced back into the fairway. From there, he hit his next shot into a bunker but still salvaged par.

The win assured, Jimenez tipped his visor to the fans as he walked up the 18th fairway. He then winked and blew a kiss to a TV camera.

He brought his victory cigar to his postgame press conference.

“I showed my game is in very good shape now,” said Jimenez, who added he isn’t complaining about life at 50.

Langer said he doesn’t expect to see Jimenez on the Champions Tour again this year.

“He said he wasn’t going to play anymore this year because he wants … to be the oldest European player to ever play on the Ryder Cup,” Langer said. “That’s his goal. But, you know, goals can sometimes change. Who knows, maybe he makes the Ryder Cup team by July and he’ll decide to come out for a couple of weeks.”

Fred Couples, in the final group with Jimenez and Langer, shot 70 and was fourth. Langer tied for eighth and Couples tied for 20th in the Masters. Jimenez said coming out on top of the high-profile group made the win even nicer.

“Of course it’s satisfaction,” Jimenez said. “The better quality the field, the more satisfied you are with the victory. All three were playing very well in the Masters. We all were in contention. That’s nice.”

Steve Pate, Duffy Waldorf and David Frost tied for fifth. Willie Wood shot 66 and was in a group tied for eighth.

Rod Funseth (1983 Hall of Fame Tournament) and Bruce Fleisher (1999 Royal Caribbean Classic) are the only other players to lead from start to finish in their first Champions Tour events.

Canada’s Rod Spittle and Jim Rutledge finished as part of a group that tied for 29th at 1-under 215.