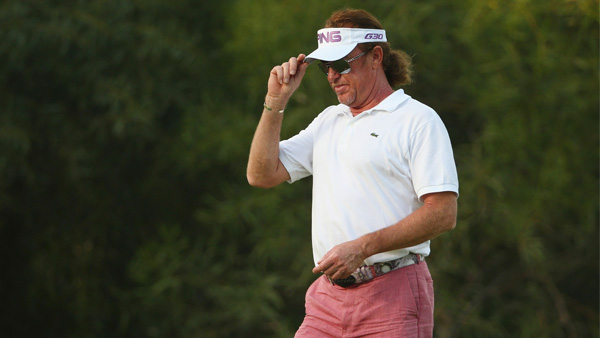 BELEK, Turkey – Spain’s Miguel Angel Jimenez shot a 9-under 63 Thursday for a one-stroke lead on the opening day of the Turkish Airlines Open.

The 50-year-old Jimenez eagled his opening hole and had seven birdies in an 11-hole stretch starting on the fourth. He was one shot off the record at the Montgomerie Maxx Royal course.

England’s Ian Poulter also recorded an eagle and seven birdies, but a bogey left him one shot off the lead.

John Daly shot a 69 and Colin Montgomerie, celebrating his 600th European Tour event, had a 76.

Eleven months ago, Jimenez broke his own record for oldest winner on the European Tour when he defended his Hong Kong Open title at age 49 years, 337 days.

“To shoot nine-under par on this course in only first round, it’s a good start,” he said. “I was six-under par after seven holes and playing very well, and you just try to enjoy yourself. So this is a special round because I’ve been struggling a little bit the last few months. But when you shoot under par, you feel very good.”

Poulter was pleased with his effort after coming close to falling outside the top 50 in the rankings.

“I decided to switch back to my old putter late last week that has a softer insert and it felt really good on these quick greens,” he said. “So the old putter is back in the bag.”