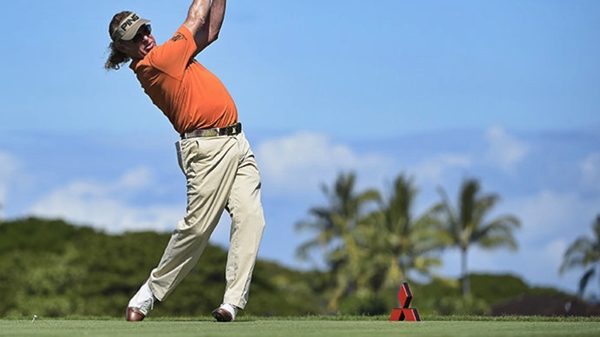 KAUPULEHU-KONA, Hawaii – Miguel Angel Jimenez shot an 8-under 64 in windy conditions Saturday for a share of the lead with Rocco Mediate in the Champions Tour’s season-opening Mitsubishi Electric Championship.

Jimenez had nine birdies and a closing bogey to match Mediate at 11-under 133 at Hualalai Golf Club. Mediate, the first-round leader after a 66, had a bogey-free 67.

Jimenez is making his third Champions Tour start. The Spaniard won the Greater Gwinnett Championship last year, a week after finishing fourth in the Masters. In May, he won the Spanish Open at 50 years, 133 days to break his own record as the oldest European Tour champion.

“With this wind, you just have to pay attention and play the right shot,” Mediate said.

Olin Browne was third at 9 under after a 67. Fred Couples, Colin Montgomerie and Mark O’Meara were another stroke back. Couples shot 64, Montgomerie 66, and O’Meara 67.

Couples had an eagle and three birdies on the four par 5s.

“I putted really well,” Couples said. “I hit some really good putts early in the round and they didn’t go in, then I started making them and they all went in.”

Defending champion Bernhard Langer was 7 under after a 65. He had a 10 on the par-5 seventh hole in his opening 72.

The 40-player field features major champions from the last five years, other tournament winners in the last two seasons and sponsor invitees.