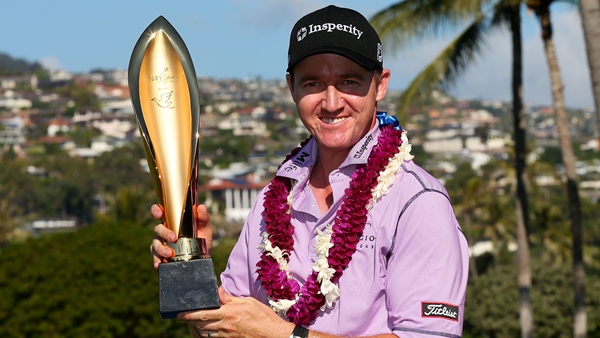 HONOLULU – At least Jimmy Walker is leaving Hawaii with one trophy.

Six days after losing a tournament on Maui he felt he should have won, Walker turned in a command performance Sunday on Oahu. He blew away the field with a 7-under 63 to win the Sony Open for the second straight year.

His fourth career victory was the most impressive of all. On a course that lends itself to a free-for-all, Walker shot 62-63 on the weekend and set a tournament record with a nine-shot victory. The previous record was seven shots, last set in 2000 by Paul Azinger.

Walker became the first repeat winner at the Sony Open since Ernie Els in 2004.

Scott Piercy closed with a 66 to finish alone in second. Matt Kuchar, who started the final round two shots out of the lead, didn’t make a birdie and shot 71 to tie for third with Harris English and Gary Woodland, who each had a 67. Kuchar ended his streak of 255 rounds on the PGA Tour with at least one birdie.

But this was Walker’s show, and it couldn’t have happened at a better time. Walker had a three-shot lead with five holes to play at Kapalua last Monday when he wound up losing to Patrick Reed in a playoff at the Tournament of Champions. With a quick turnaround, he quickly put it behind him.

“I really wanted to finish out the day like I didn’t do last week,” Walker said.

The decisive moment came at the par-4 eighth hole. Walker and Kuchar both opened with seven straight pars, and Walker stuffed his approach to 3 feet for birdie. Kuchar pulled his tee shot into the royal palms, punched out short of the green and made bogey.

That two-shot swing gave Walker a four-shot lead, and he was on his way.

Walker made all seven of his birdies over the final 11 holes, and he couldn’t miss on the back nine. He took a total of 20 putts on the back nine at Waialae in the third and fourth rounds. And even with a big lead, he kept grinding away over putts he didn’t need to make.