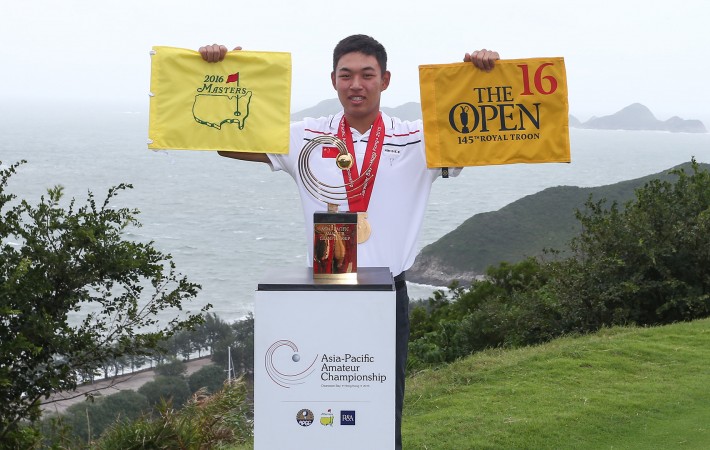 HONG KONG – Third-round leader Jin Cheng of China won the Asia-Pacific Amateur championship without hitting a ball on Sunday after the fourth round was abandoned due to heavy rain and high winds at Clearwater Bay Golf and Country Club.

Jin, who led by two strokes after each of the first two rounds, had a 54-hole total of 11-under 199 to edge Australian amateur champion Cameron Davis and his countryman Ryan Ruffels by one stroke.

His win, which assures him a spot in next year’s Masters, was set up by a tournament record 8-under 62 on Thursday. A clutch final-hole birdie on Saturday secured victory for the 17-year-old.

Jin, who plans to play in the Macau Open later this month, was thrilled with the result and the prospect of playing at Augusta.

“This win just came so fast and so sudden,” Jin said. “I was ready for the round today and unfortunately the weather didn’t work out. Going there (the Masters) next year is just amazing for me. I’m so excited and looking forward to it. This win should give me a lot of confidence.”

The final round got under way as scheduled on Sunday but was suspended soon after with only nine groups on the course. Organizers abandoned play just after 11 a.m. (0300 GMT), with the inclement weather caused by nearby Typhoon Mujigae showing no sign of relenting.

If the final round had proceeded, Ruffels, Davis and defending champion Antonio Murdaca of Australia, who shot a 64 on Saturday to surge into contention, looked set to challenge Jin for the title.

Although they knew on Saturday that Sunday’s play may not go ahead, with a Masters berth on the line, it was still tough to take for the runners-up.

“I guess it’s not hard to tell that we are both pretty gutted,” Ruffels said. “Obviously there’s nothing you can do about the situation. The tournament did great in just trying to get us out there. Credit to Cheng, he played amazing this week to back up 8-under with those two rounds in some tough conditions.”

It was Jin’s fourth start in the tournament, with his previous best finish a tie for 12th at Royal Melbourne last year. He is the second Chinese player to win the event after Guan Tianlang’s triumph in 2012.

To go with his Masters berth, Jin, along with Ruffels and Davis, earned a place in the final round of qualifying for the 2016 British Open at Royal Troon.

Taiwan’s Yu Chun-an and Kim Tae-ho of South Korea finished in a tie for fourth, three shots off the pace.