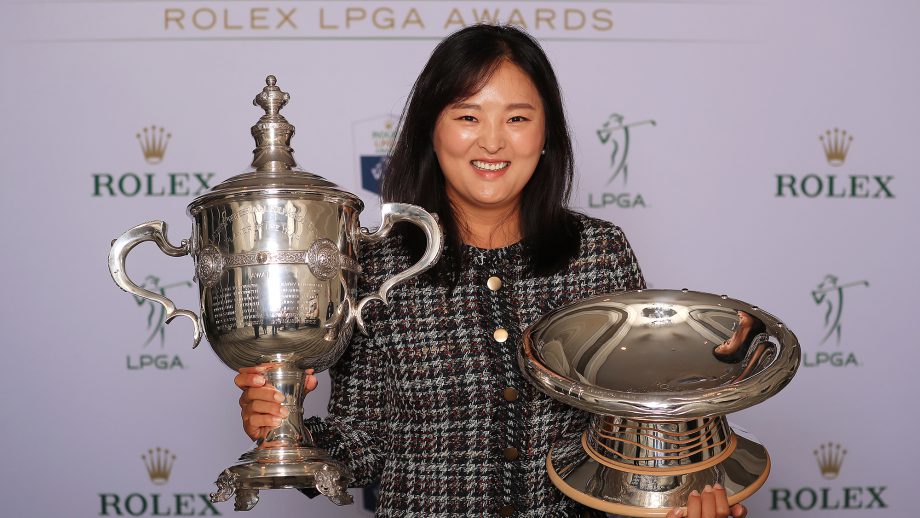 NAPLES, Fla. – As the 2019 LPGA Tour season ends, the CME Group Tour Championship provided the perfect opportunity to celebrate a year’s worth of incredible on-the-course performances and off-the-course accomplishments.

“At this very special occasion, I want to say that this is not the end but only the beginning,” said Ko. “I will work even harder to become a better golfer.”

Additionally, by winning the 2019 Official Money title with $2,773,894, Ko joined Yani Tseng, Lorena Ochoa and Ariya Jutanugarn as the only players to win the Player of the Year and the Vare Trophy and lead the Tour in season earnings while also sitting first in the Rolex Women’s World Golf Rankings.

Brooke Henderson received the 2019 Founders Award, an honour previously known as the William and Mousie Powell Award. The award is given annually to an LPGA Member who, in the opinion of her playing peers, best exemplifies the spirit, ideals and values of the LPGA through her behavior and deeds. The award has been given out since 1986, with a list of previous recipients that includes Kathy Whitworth, Nancy Lopez, Pat Bradley, Betsy King, Juli Inkster, Lorena Ochoa, Chella Choi, Juli Inkster, Karrie Webb and So Yeon Ryu. Effective this year, the award will be presented in honour of the 13 LPGA Founders who began the LPGA Tour in 1950.

“I know we as a Tour will continue to do our best to honour all 13 Founders and act as they so courageously and inspiringly did. What makes this award even more special is that it was voted on by my playing peers on the LPGA. Thank you to all of you,” said Henderson. “I have made many great friends over my five years on Tour. I love being able to live my dream playing out there and to experience this journey along so many talented golfers who are also great people.”

Suzann Pettersen, who retired in September after returning from an extended maternity leave to sink the winning putt for Team Europe at the 2019 Solheim Cup, was named the winner of the 2019 Heather Farr Perseverance Award. The award honours an LPGA player who, through her hard work, dedication and love of the game of golf, has demonstrated determination, perseverance and spirit in fulfilling her goals as a player. Established in 1994, the Heather Farr Perseverance Award celebrates the life of Farr, an LPGA Tour player who died on Nov. 20, 1993, following a four-and-a-half-year battle with breast cancer. Previous winners of this award include Heather Farr, Shelley Hamlin, Martha Nause, Terry-Jo Myers, Lorie Kane, Nancy Scranton, Brandi Burton, Kris Tschetter, Kim Williams, Beth Daniel, Colleen Walker, Amy Read, Se Ri Pak, Leta Lindley, Sophie Gustafson, Lisa Ferrero, Stephanie Meadow, Ariya Jutanugarn and Jessica Korda.

“I never knew Heather Farr, but I’ve known of her and this award since I joined the LPGA Tour. I can’t tell you how much is means to receive this, not just because of the player it honours, but because of all the players who have received before me and because it’s chosen by our fellow players, my peers,” said Pettersen, who became emotional later in her speech when speaking of her son Herman. “The LPGA Tour has been such a huge part of my life. It gave me the opportunity to follow my childhood dream and to reach beyond my wildest imagination. To go places, meet people and do things I never dreamed possible. For almost two decades, I’ve been able to measure my game against the very best female golfers in the world. I made many great friends and received lots of good advice along the way.”

“With the support of my family and friends, I was able to pursue my biggest dream. The LPGA Tour is where we get to compete with the best players in the world. Just being a part of it made me feel like I could take on anything,” said Lee6, the 13th player from the Republic of Korea to capture the honour and the fifth consecutive, following Jin Young Ko (2018), Sung Hyun Park (2017), In Gee Chun (2016) and Sei Young Kim (2015). “It is an honour to compete on the LPGA Tour, to be able to play at the best golf courses around the world and among the world’s best golfers. Winning the U.S. Women’s Open and receiving Rookie of the Year has all been a dream come true.”

LPGA Commissioner Mike Whan selected KPMG as the 2019 recipient of the Commissioner’s Award. In his speech, Whan spoke of their foresight in stepping in as title sponsors of the KPMG Women’s PGA Championship, revamping the LPGA Championship into a week-long celebration of female leadership and empowerment. When accepting the award, retired Chairman of KPMG International and incoming LPGA Board member John Veihmeyer thanked LPGA Tour player and KPMG Ambassador Stacy Lewis for her role in elevating the competition and focusing its most important asset – the players.

Nancy Quarcelino, a member of the LPGA Teaching & Club Professionals (T&CP) Hall of Fame who has coached players on both the LPGA Tour and the PGA Tour, joined an elite group of her peers as the recipient of the 2019 Ellen Griffin Rolex Award. Instituted in 1989, the award honours the late Ellen Griffin, the best-known woman golf teacher in U.S. history. The award recognizes an individual, male or female, who has made a major contribution to the teaching of golf and who has demonstrated, through teaching, Griffin’s spirit, love and dedication to the golf student, teaching skills and game of golf.

Earlier in the week, the LPGA Tour celebrated the winners of two season-long competitions. Carlota Ciganda captured the inaugural Aon Risk Reward Challenge and earned the $1 million prize. The competition, which measured the performance of LPGA Tour and PGA Tour golfers on a series of holes across multiple tournaments, tested players’ ability to analyze risk, utilize data-driven insights to identify opportunities and maximize performance in the moments that matter most. Ciganda joined PGA Tour winner Brooks Koepka in winning the inaugural honour, with both players receiving equal prize money.