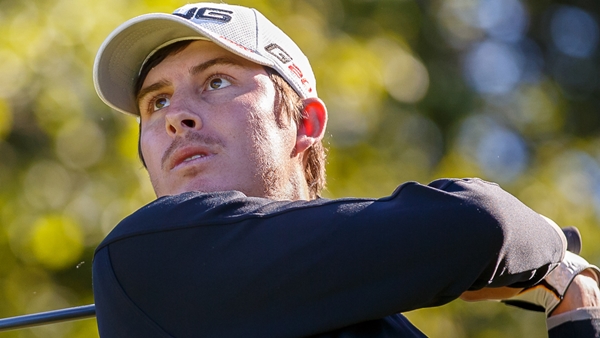 Fort McMurray, AB – PGA TOUR Canada Order of Merit leader Joel Dahmen tied the course record at Fort McMurray Golf Club on Thursday, carding a 9-under 63 to take the first round lead at the Syncrude Boreal Open presented by AECON.

The Clarkston, Washington native, who claimed the PC Financial Open three weeks ago for his first PGA TOUR Canada win, made 10 birdies and one bogey to lead by two shots over Massachusetts’ Evan Harmeling.

“I actually only made one putt outside of 12 feet, so I hit it really close all day,” said Dahmen. “My wedges were on fire.”

The 26-year old comes to Fort McMurray a year after sharing the 54-hole lead at the 2013 Syncrude Boreal Open presented by AECON, and while he was only able to muster a 1-under 71 and a tie for fourth last year, Dahmen said he was comfortable on Thursday thanks to his experience last year.

“I played really aggressively off the tee today,” said Dahmen. “There are some lines off the tee I can be more aggressive on because I’m more comfortable out here, and I hit it really well, so that helps a lot.”

With a win at the start of the 2014 season, Dahmen said he felt comfortable taking more risk in his on-course strategy to try and secure another strong finish to solidify his place atop the Order of Merit.

“I’m playing well and I’m hitting it well, so that helps me to play aggressively, but knowing I had a little head start and a win in the back pocket definitely frees me up a lot,” said Dahmen.

Two shots behind Dahmen, Harmeling said a solid day on the greens propelled him to his opening round of 65, his lowest career round on PGA TOUR Canada.

“I came out here yesterday and made everything and kind of continued it on today,” said Harmeling. “I thought they were rolling true. I’m really happy with how I played. I putted really well out there.”

Another shot behind Harmeling were California’s Daniel Miernicki, who held the lead for much of the day by carding the low round of the morning wave, and Sarnia, Ontario’s Matt Hill, who birdied his final three holes for a 6-under 66.

HILL MAKES MOST OF RETURN WITH OPENING 66
Two years ago at the Syncrude Boreal Open presented by AECON, Sarnia, Ontario’s Matt Hill was in the middle of a torrid run that drove him to an Order of Merit title. The former Jack Nicklaus Award winner at NC State University wound up losing in a playoff to Cory Renfrew, then won the following week at the SIGA Dakota Dunes Open presented by SaskTel to cement his top spot, eventually earning a spot on the Web.com Tour for 2013.

Playing this week on a sponsor’s exemption, Hill finds himself in a different situation with a chance to play his way up the conditional member ranking with a solid finish this week. The 25-year old said he was simply focusing on playing good golf, however, and avoiding any distractions.

“I’m not really looking at what everything means. I’m just out trying to have some fun and play golf,” said Hill. “I know I can win out here, and that’s my goal. I try to prepare as well as I can and just try to play smart golf and hit fairways and greens.”

ANDERSON USES HOME FIELD ADVANTAGE IN ROUND ONE
When four-time PGA TOUR Canada winner Stuart Anderson was a kid, he would take advantage of the long northern Alberta summer days by playing 54 holes a day at Fort McMurray Golf Club, breeding a familiarity with the golf course few players can claim at a PGA TOUR Canada event.

“You can close your eyes and go through every piece of the property. It’s a beautiful place and I love being here,” said Anderson, who fired a 3-under 69 in round one to sit tied for 20th.

The 36-year old is playing on a sponsor’s exemption this week, and looking to get back to the form that saw him win as recently as the 2011 TOUR Championship of Canada. After reaching the Web.com Tour in 2012, Anderson failed to keep his PGA TOUR Canada card last season and finds himself looking to return to the TOUR with a solid performance on his home track. One way to do that would be finishing in the top-20 this week and earning a start at the SIGA Dakota Dunes Open presented by SaskTel in two weeks.

“One goal is to finish top-20 so I play the next event in Saskatoon,” said Anderson. “Overall I’m happy. Going into the week I had the goal of shooting in the 60s every day, so it’s a good start to that.”