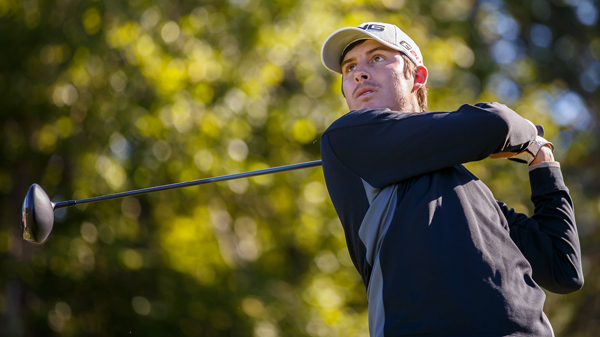 (FORT MCMURRAY, Alta.) – In what is becoming a regular occurrence on PGA Tour Canada this season, Clarkston, Washington’s Joel Dahmen finds himself atop the leaderboard once again after shooting 4-under par at Fort McMurray Golf Club to take a five stroke lead into the final round of the Syncrude Boreal Open presented by AECON.

The Order of Merit leader got his day started right with birdies on two of his first three holes to break away from the field and look as though he may run away and hide with the Order of Merit lead through three events. Dahmen led by five over Las Cruces, New Mexico’s Tim Madigan and by six over Syracuse, N.Y.’s Daniel McCarthy and defending champion Riley Wheeldon of Comox, B.C. through three rounds.

“I didn’t make a bogey today, which is huge. It was kind of a goal of mine,” said Dahmen, who has made just two bogeys for the week and is without a blemish on the scorecard in his last 35 holes. “It’s been great.”

After cruising along for much of the day without trouble, the 26-year old faced a difficult sand save on the par-3 15th and a 15-foot par putt following an indifferent bunker shot. The ensuing putt, however, found the cup for par, keeping Dahmen’s momentum going.

“I hadn’t been close to a bogey all day, so I said to my caddie, ‘We have to make this one.’ There was a little fist pump in there. That was huge,” said Dahmen, who shared the 54-hole lead here last year before finishing tied for fourth.

Despite the considerable lead heading into Sunday and the chance to take a vice grip on PGA TourCanada’s Order of Merit, the former University of Washington Husky isn’t getting too far ahead of himself before a chance to close the deal in the final round.

“It’s far from over,” said Dahmen. “One swing and you make double or triple and a guy makes birdie and it’s back to square one. If I go out tomorrow and shoot four- or five-under and play well it’s going to be very difficult for somebody to catch me, and that’s going to be the plan.”

Dahmen added that the big lead wouldn’t lead to a change in his strategy at Fort McMurray Golf Club on Sunday.

“I’m not taking too many chances, but it’s more of a conservative strategy with an aggressive swing,” said Dahmen. “My strategy isn’t overly aggressive, but my mind frame has to be.”

Canada is well represented in the top 10 thru three rounds. Riley Wheeldon shot 66 Saturday and is tied for third. Montreal’s Beon Young Lee, who recently earned an exemption into the 2014 RBC Canadian Open, shot 69 and is tied for fifth with Ryan Williams, who carded 72.

Devin Carrey of Burnaby BC is 11-under at the close of 3 solid rounds and is tied for eighth.