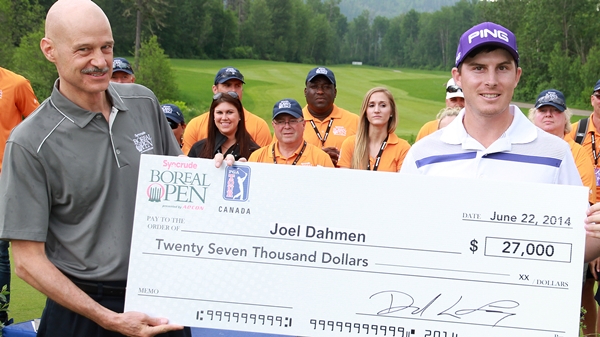 FORT MCMURRAY, Alta. – With a final round 3-under 69 at Fort McMurray Golf Club, Clarkston, Washington’s Joel Dahmen won the Syncrude Boreal Open presented by AECON by five strokes on Sunday, claiming his second win of the season on PGA Tour Canada and taking a commanding lead on the Order of Merit through three events.

The 26-year old, who claimed the PC Financial Open three weeks ago in Vancouver for his first PGA Tour Canada win, moves to the top of the Order of Merit with $56,813 in earnings, and has a $28,815 lead on second place.

“I played really solid. I hit it great again,” said Dahmen, who finished 22-under par for the week. “I actually missed the first green, but after that I settled down and I hit it great. I didn’t make many putts, but I didn’t really have to. I made a birdie on 9 to take a five shot lead into the back nine, and after that nobody really made a push towards me.”

Dahmen fired a 9-under 63 in round one to take a two stroke lead and never looked back, becoming the first wire-to-wire winner on PGA Tour Canada since John Ellis at the 2008 Mexican PGA Championship.

The victory sees Dahmen continue what has been a breakthrough year, one that looked unlikely last winter when he admitted he felt disappointed by his performance in 2013. Dahmen had a handful of chances to win last season but was unable to convert and finished 22nd on the Order of Merit.

“It’s crazy. Literally last year, this winter, I was sitting on the couch all bummed out and all of a sudden stuff is happening and dreams are being realized,” said Dahmen. “I’m very close to doing a lot of great things in the next year, so I’m excited.”

With the win, the former University of Washington Husky puts himself in great position to play in his first PGA Tour event. The top three on the Order of Merit through the Staal Foundation Open presented by Tbaytel earn a spot in the RBC Canadian Open.

“This virtually locks up my RBC Canadian Open spot, I’m pretty sure, so I get to play my first PGA Tour event in a month or so. That’s going to be incredible,” said Dahmen, who will also make his second career Web.com Tour start next week at the United Leasing Championship presented by PTI thanks to a sponsor’s exemption.

Dahmen’s win is once again a popular one amongst PGA Tour Canada members, as a gathering of fellow competitors waited to congratulate the winner as he exited the 18th green, including 2012 and 2013 Syncrude Boreal Open presented by AECON champions Cory Renfrew and Riley Wheeldon.

“We have great camaraderie out here,” said Dahmen. “It’s nice just to know that we’re all pulling for each other. I’m excited for them and I know their time is coming. We all feed off each other a little bit, and I think it helps.”

“I had to kind of poke him in the ribs on Friday night and Saturday morning because of the weather, and he wasn’t sure if he was going to caddie. I said, ‘I need you out there, Will,’” said Dahmen. “He’s an incredible player himself and he’s been around, so he knows how to caddie and what to say.”