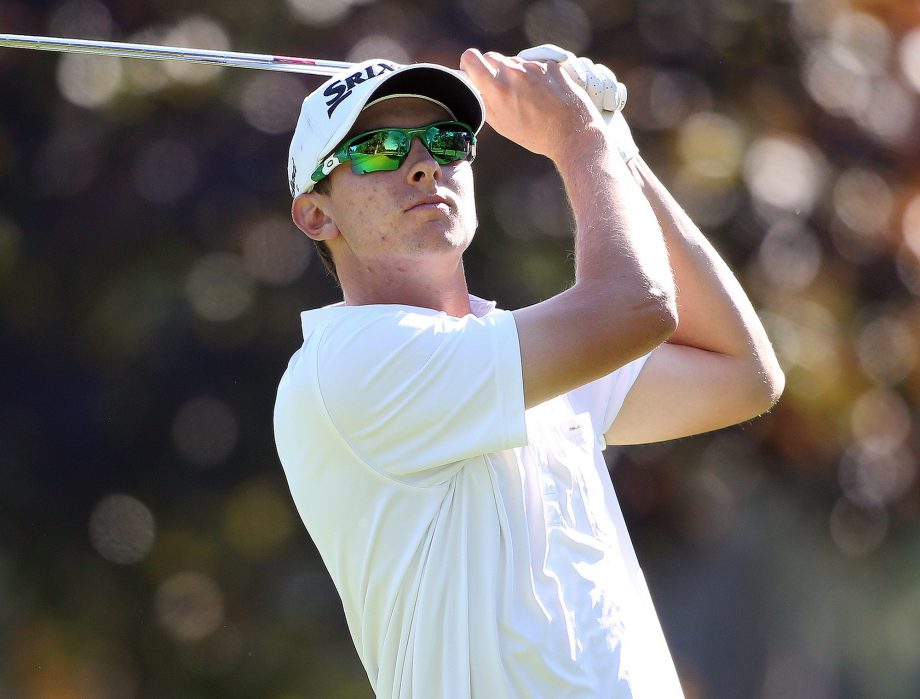 Gold River, California’s John Catlin shot a 7-under 63 at Highland Country Club on Thursday to take the first round lead at the Freedom 55 Financial Championship, the final event of the 2015 Mackenzie Tour – PGA TOUR Canada season.

“I tried to go out and have fun today. I think I’ve been taking it too seriously, and I just tried to enjoy every shot and take it all in. I hit a lot of good shots and made some good putts,” said Catlin, who enters the week 42nd on the Order of Merit with two top-10s to his name.

The 24-year old University of New Mexico grad said the pristine greens at Highland freed him up with the putter and helped him build his lead, the largest first-round lead of the PGA TOUR era on the Mackenzie Tour.

“Putting was definitely the key. It’s good to be on some really good greens. I was seeing the lines really well and they happened to go in for me,” said Catlin.

For much of Thursday, it appeared Order of Merit leader J.J. Spaun would keep pace with Spaun and take control of his money list lead, reaching 7-under with a birdie on the 14th. Spaun tumbled with a bogey and double bogey over his final three holes, however, to drop back into a tie for second at 4-under.

“I just made some dumb errors coming in, but there’s nothing I can do about it. At least I’m in a good position heading into the next three rounds,” said Spaun.

Gilbert, the 2013 Freedom 55 Financial Championship winner, posted his lowest opening round of the year with a 66 to share second place through one round.

3: John Catlin’s 18-hole lead, the largest first round lead of the PGA TOUR-era on the Mackenzie Tour.

34: Players within three shots of second place after one round.

“I was hoping to have a good week last week and it went well, so it was perfect. After the break before Calgary, I was 80-something [on the Order of Merit]. I knew I had four tournaments to play well. It’s so good to be here and I’m having some fun.” – Max Gilbert on playing his way into London this week with a T10 finish at the Cape Breton Celtic Classic, moving from 69th to 55th on the Order of Merit.

“I know the guys in front of me and the guys behind me are the ones I need to beat. You want to beat everybody, but that’s my main goal – to stay inside the top-20 this week. I know if I play well that should look after itself, and if I find myself in contention at the end of the week then that’s a bonus.” – Riley Wheeldon, who enters the week 20th on the Order of Merit. The top 10 on the Order of Merit earn an exemption into the second stage of Web.com Tour Q-School.

“It’s exciting that I’m playing the way I know I can play, especially this late in the year when it means something. It was playing so tough today. I don’t know how John Catlin shot 7-under; that’s a good round.” – Michael Miller, who opened with a 4-under 66, his fourth straight opening round of 68 or better.