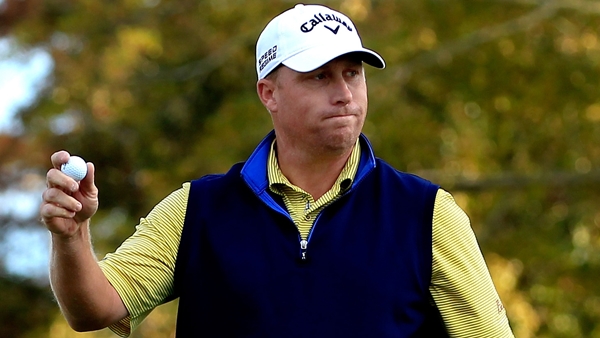 JACKSON, Miss. – John Rollins took a two-stroke lead Saturday in the Sanderson Farms Championship, birdieing two of the final five holes for a 4-under 68.

Tied with David Toms for the second-round lead, Rollins had a three-round total of 14-under 202. He won the last of his three PGA Tour titles in 2009.

“Today was a little bit more of a grind than the last couple of days,” Rollins said. “I didn’t drive it quite as well today, so I was playing out of the rough, which on this golf course is not fun. But I made some key putts to keep the round going and just grinded out a 4-under par to keep myself in position.”

William McGirt was second after a 66, matching the best round of the day in sunny, calm conditions.

Jason Bohn and Lucas Glover were third at 11 under. Bohn also shot 66, and Glover had a 67.

“If we have weather similar to what we had today, there’s definitely a 6-, 7-, 8-under par out there, maybe even lower than that,” Bohn said. “Anybody that’s within six shots of the lead has a chance to win.

“At least I didn’t shoot myself out of the tournament,” said Toms, a 13-time PGA Tour winner.

The 39-year-old Rollins has limited tour status as a past champion after losing his card last season and failing to regain it in the four-event Web.com Tour Finals.

He said a driving-range tip from his caddie Wednesday helped him dial it back on the tee box, and the result was much more consistent play with his driver.

“A lot can change in one week,” Rollins said. “But the big thing is I can’t get ahead of myself. I can’t start thinking about where I am and what’s going on, and status and all this sort of stuff. I’ve just got to play golf, and that’s what we’re going to try to do and try to enjoy it.”

Rollins has at least a share of the 54-hole lead for the sixth time in his career. After failing to win the first four times, he held on in the last in the 2009 Barracuda Championship in Reno, Nevada.