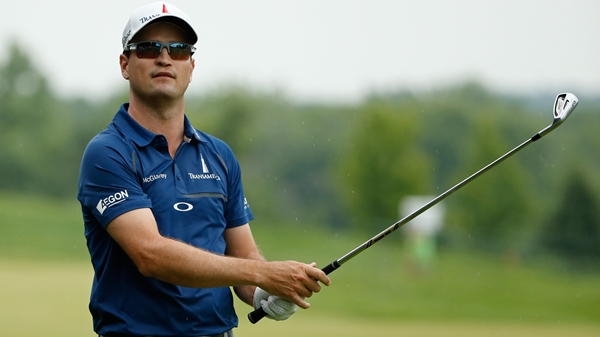 SILVIS, Ill. – Zach Johnson and William McGirt were at 12-under-par 130 and tied for the lead at the halfway point of the John Deere Classic.

They were a stroke ahead of Steven Bowditch, Johnson Wagner and Brian Harman.

Three-time Deere winner Steve Stricker shot a 65 Friday for a 133 total to vault into contention at the par-71 TPC Deere Run, and was tied for sixth with Rory Sabbatini, Ryan Moore and Todd Hamilton.

Johnson, the Deere winner in 2012, shot a 4-under 67 in the afternoon despite two bogeys in his last four holes. That dropped him into a tie with McGirt.

McGirt, 35, is looking for his first PGA Tour victory.

He added a 66 to his opening 64, but like Johnson, he finished with a bogey. McGirt’s best finish this year is a tie for sixth in the Northern Trust Open at Riviera. Since then, he’s had one top 10 and has missed the cut in seven of 14 tournaments.

McGirt is winless on the PGA Tour in 111 starts, most of them in the last four years. His best finishes are a pair of ties for second in the Canadian Open, in 2012 and 2013.

Asked how he’d gotten to 12 under and the lead on Friday, he said, “I couldn’t tell you what happened.”

Four birdies in a row and seven in a stretch of nine holes happened.

One thing McGirt hasn’t been doing well recently is sinking putts, but he’s needed only 24 in each of the first two rounds.

“For some reason I’m able to see the line this week,” McGirt said. “I feel I’ve putted better the last few weeks and haven’t holed anything.”

Bowditch opened his round with an eagle 3 on the 10th hole en route to a 67, while Wagner made it to 12 under before a bogey on his last hole.

Stricker matched McGirt’s 5-under 30 on Deere Run’s front nine to finish his round.

Jerry Kelly and Charles Howell III were among those at 8 under. Howell, who shot 68, aced the uphill 132-yard third hole.

Defending champion Jordan Spieth was five strokes back of the leaders through 36 holes thanks to a 64 for 7-under 135. He was five back after two rounds last year.

Johnson’s victory in 2012 isn’t the only good finish at the Deere for the native of nearby Cedar Rapids, Iowa. He lost in a playoff last year, tied for second in 2009, and tied for third in 2011. He also sits on the tournament’s board of directors.

There’s a comfort level for Johnson that didn’t exist previously, when he missed the cut three times in seven years and didn’t finish better than 20th.

“I’ve grasped and embraced the fact I’m going to have a lot of friends outside the ropes, and it’s terrific,” Johnson said. “They don’t care if I shoot 62 or 82. They’re still going to be on my side.

“Trying to play for them may have been part of the issue years ago, but not anymore.”

Stricker, 109 under par in 22 rounds since 2009 at Deere Run, got within sight of the leaders with his 30 on the course’s front nine to finish his round.

“At least I kept pace,” Stricker said. “This was an important day for me. I didn’t go out with a specific number in mind, but I knew I needed something good.”

Stricker won three straight at Deere Run starting in 2009, and has tied for fifth and 10th place, respectively, the last two years.

“I know how to play it, I guess,” Stricker said. “There’s a lot of short iron shots, which plays into my game, and I seem to putt the ball really well, too.”

Both Canadians in the field were able to survive that cut.