Johnson opens with a 70, four shots out of lead at Wells Fargo 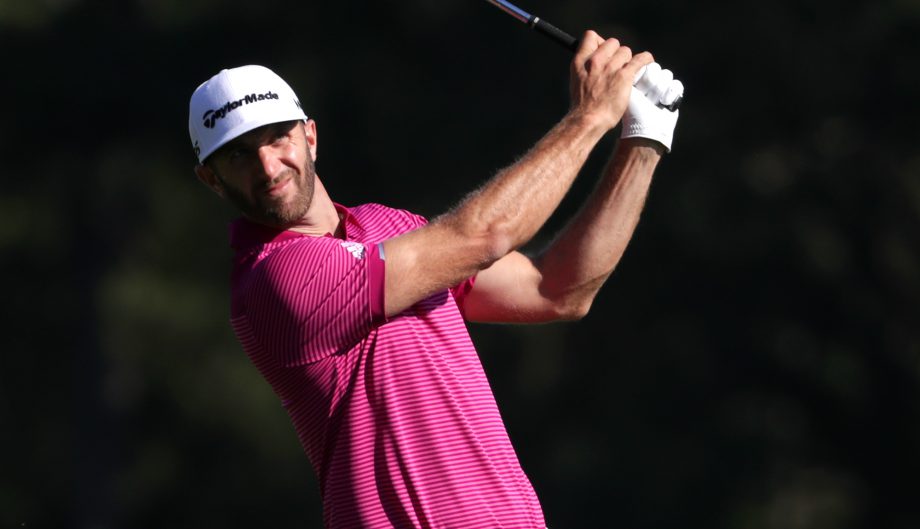 Six weeks away from competition didn’t keep Dustin Johnson from extending one streak Thursday, with hopes of adding to another.

Johnson showed more game than rust at the Wells Fargo Championship, where he missed only two greens – and plenty of putts – for a 2-under 70 that left him four shots behind Francesco Molinari among the early starters at blustery Eagle Point Golf Club.

It was Johnson’s 13th consecutive round at par or better.

Johnson wasn’t as flawless as he looked while winning three straight tournaments, though he had few complaints under the circumstances. It was his first time playing since he slipped in his socks down the stairs at his rental house in Augusta National, hurting his back and knocking him out of the Masters.

“Since I hadn’t played in so long, I’m happy with the way I played,” Johnson said. “I didn’t score that great, didn’t really hole that many putts, but other than that, I played really well. I think I hit 16 greens and I hit the ball great.”

No one was sure what to expect at Eagle Point, where the Wells Fargo Championship moved this year because its traditional venue, Quail Hollow Club in Charlotte, is hosting the PGA Championship in August.

On greens that were slightly softer and as pure as can be, Molinari ran off five birdies in a seven-hole stretch on the front nine and closed out his round with a 20-foot birdie putt on the par-5 18th.

That gave him a one-shot lead over Alex Noren of Sweden, who is trying to play well enough in the majors, World Golf Championships and a few other American events to secure a PGA Tour card for next year. Noren, who played college golf at Oklahoma State, won four times last year on the European Tour and is No. 12 in the world.

Ben Martin and Ken Duke were at 68. Of the 78 players who started in the morning, only 23 players broke par. Phil Mickelson was among those playing in the afternoon.

Johnson started well enough to act as though nothing has happened since he last played March 26 at the Dell Technologies Match Play, his third straight victory, which strengthened his hold at No. 1 in the world.

He was rarely in trouble, made only one putt longer than 10 feet and still shot 70. It was a reasonable start in resuming his quest for a fourth straight PGA Tour victory, which would be the longest streak since Tiger Woods won five in a row at the end of the 2007 season and the start of 2008.

“I played a lot better than my score,” Johnson said.

He didn’t miss a green until a gust knocked down his tee shot on the par-3 second hole (his 11th of the round) and sent it down a slope short of the green. He chipped weakly up the hill to 12 feet and made his first bogey. He closed out his round by pulling a drive on the par-4 ninth hole, punching under tree limbs to short of the green and again pitching it short. He started walking as soon as he hit his 10-foot par putt, knowing it was off to the right.

“All in all, I’m very pleased with the day,” Johnson said.

There were no issues with the deep bruise he suffered in his lower left back, which ranks among the top freak accidents in golf under the circumstances. Johnson was playing the best golf of his life – those three victories were against the three strongest fields of the year – when he hustled downstairs to move his car in the rain because his 2-year-old son was on his way home from day care.

He slipped at the bottom of the stairs, crashing onto his back and left elbow, and Johnson couldn’t swing well enough to compete at the Masters.

That put him at 3 under through eight holes, at the time tied for the lead, and he hammered another drive on the par-5 18th. With the wind in his face and water on the right, Johnson elected to lay up. His lob wedge was 20 feet right of the pin, and there were other short irons that a month ago he would have expected to get within 10 feet. The few times he did, Johnson missed the putts.

“I knew I wasn’t going to play as good,” Johnson said. “I maybe played a little more conservatively. But anything under par was going to be a good score.”

Canadians Mackenzie Hughes and Nick Taylor were among the 23 competitors able to break par at 2-under and 1-under respectively. Hughes recorded six birdies and four bogeys on the day.