Johnson races out to 6 shot lead in HSBC Champions 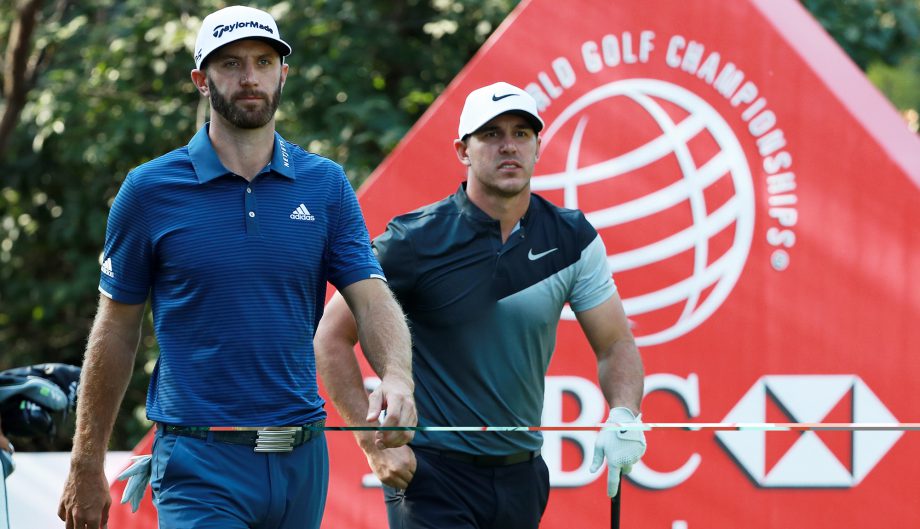 SHANGHAI – As part of a promotional stunt for the HSBC Champions earlier in the week, Dustin Johnson was among three players wearing superhero capes on a hotel roof, suspended by ropes a few feet in the air against a backdrop of downtown Shanghai at night.

“I should have pushed him off the platform,” Henrik Stenson said with a laugh.

That might have been the only way to stop the world’s No. 1 player from more domination in the World Golf Championships.

All it took was one hole Saturday for Johnson to seize control on a blustery day at Sheshan International, along with some help from Brooks Koepka. A four-shot swing on the par-5 eighth hole – a birdie for Johnson, a triple bogey for Koepka – sent Johnson on his way to a 4-under 68 and a six-shot lead going into the final round.

His only big number was not all his doing.

Johnson’s drive down the right side of the 10th hole hit a cart path and took a hard bounce over a wall and into the bushes, leading to double bogey. Otherwise, it was the same recipe that took him to No. 1 in the world – big tee shots, control of his short irons and just enough putts to make him look tough to catch.

“I’m not going to change anything – play the golf course just how I’ve been playing it,” said Johnson, who has 22 birdies in 54 holes and was at 17-under 199. “I’m in a good position going into tomorrow, but I’m still going to have to go out and play a really solid round if I want to get it done.”

Johnson won the WGC-Mexico Championship and the WGC-Dell Technologies Match Play in Texas.

“He’s going to wake up in good shape and go ahead and play a solid round of golf. If he does that, the tournament is over,” said Justin Rose, who played in the final group with Johnson and stumbled to a 72 to fall eight shots behind. “Other than that, playing for second barring something crazy from him.”

The crazy part belonged to Koepka.

Koepka, the U.S. Open champion and Johnson’s close friend and neighbour, ran off three straight birdies to start the third round and built a two-shot lead. Johnson answered with a 15-foot birdie putt on the par-3 fourth. His drive on the par-4 seventh came up just short into the rough, and he hit a nifty flop-and-run to about 3 feet for another birdie to tie for the lead.

And then after a lengthy wait on the tee at No. 8, it all changed.

With the wind at the players’ backs, and with sheer power of Johnson and Koepka, the line of the tee shot was over trees that have grown so tall in recent years they block the view of the landing area. Johnson hammered his tee shot and knew from experience he was fine.

Koepka caught his drive on the toe and it turned over from right-to-left and knew he was in trouble.

His caddie ran down toward the area to see if he had a shot, and quickly realized it was gone. Koepka hit his third shot from the tee, and then his fourth turned left into the hazard again. Koepka thought about a high-risk attempt out of the mess, but figured his best option was to take another penalty and go back to the fairway. It worked well until Koepka missed a 6-foot putt and took his 8.

Koepka had company in making a big number. Patrick Reed opened with a triple bogey and had four double bogeys on his way to an 82. Si Woo Kim made an 11 on No. 8.

“It was definitely windier today,” he said. “I didn’t think it was playing that difficult. Definitely should be able to shoot 4 under out here, minus a triple and whatever else I had, a lot of bogeys.”

There were too many bogeys to keep up with Johnson, who never let anyone closer to him the rest of the day.

Koepka went from the bunker into the water on the 18th and had to scramble to save bogey, giving him a 73. He’s still in the final group with Johnson, just like he had hoped. They have never competed against each other down the stretch, and barring a great start by Koepka or a stumble by Johnson, that probably won’t be the case Sunday.

Stenson, who is finally starting to round into form, birdied three of his last five holes for a 69.

“If Dustin keeps on playing the way that he’s done this week, I think it’s going to be a one-man show tomorrow,” Stenson said. “But you never know. Tough wind, and this golf course has a couple of holes where you can certainly have a number. It’s never over until it’s over.”