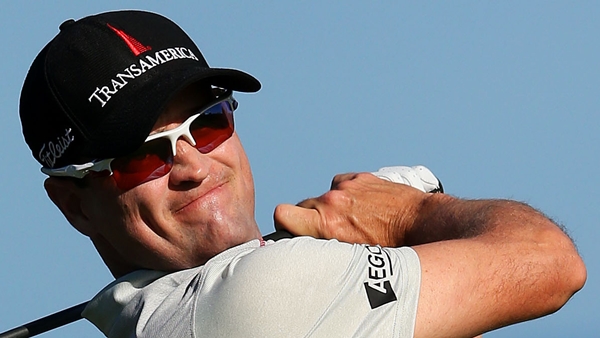 Zach Johnson putted for birdie on every hole, the fifth time in his career that he didn’t miss a green in regulation. Jimmy Walker got in the mix with five birdies in eight holes. Russell Henley and Bae Sang-Moon held their own on another gorgeous day at the Hyundai Tournament of Champions.

They were part of a four-way tie for the lead Saturday, the largest log jam at the 36-hole mark in the 17 years this winners-only event has been played at Kapalua.

Geoff Ogilvy wasn’t part of the mix, though he might have seen this coming when he spoke earlier in the week about the first PGA Tour event of the year.

“There’s a little bit of rust going on, less than there used to be,” Ogilvy said. “I think in the good old days … they hadn’t hit a shot in a few months and they’d show up and shank their first three shots on the range. They would just cruise into the year, basically. I think that happens a lot less these days.”

There’s not much evidence of it now.

Along with that four-way tie for the lead, 10 players were within two shots of the lead going into the third round, and half of the 34-man field within five shots.

Johnson gets the most attention as the defending champion, hopeful of joining the Aussie duo of Ogilvy and Stuart Appleby as the only back-to-back winners at Kapalua (Appleby won three in a row). He made seven birdies in his round of 6-under 67 and was the first to reach 11-under 135.

Walker, a winner last year on Oahu, was the only player to reach 12 under until confusion over the wind and a little indecision cost him a three-putt bogey on the 17th. He wound up with a 68. Henley recovered from a sluggish start for a 70, while Bae played bogey-free – and birdie-free over the last eight holes – for a 69.

“I think it’s so competitive,” Henley said. “I think the way guys look at it now, it’s a great opportunity to have a good finish and get off to a great start, if not win.”

Johnson got off to a great start last year when he won, his only victory of 2014.

His only bogey on another benign day above the blue Pacific was a three-putt on the eighth hole. He birdied all the par 5s, though the last one required a little more work. Johnson popped up his drive, which still went 294 yards because of the 150-foot drop from the tee to the fairway. He had to pound a 3-wood to get beyond the neck of the fairway, and then he flew his third shot beyond the flag.

Shots like that used to roll off the back of the green. In soft conditions, this one stayed, and Johnson made a 15-foot birdie putt.

“I had a full shot,” Johnson said. “At the same time, usually you’ve got to play 15 yards from the hole. That’s strange and rare, but that’s the way it is. We played a little early today. The ball just didn’t release. You have to pay attention there. As we get more wind the next couple days, I think this place will dry out.”

Walker completed a two-putt birdie on the par-5 15th by making a 6-footer into the grain to take the lead. He hammered his tee shot on the downhill 17th and, adjusting for the drop in elevation over the gorge in front of the 17th green, he figured it was an 8-iron from 170 yards.

The uncertainty was the wind, and not totally convinced of his club selection, he hit chunky and barely got onto the green. He three-putted from 70 feet for his only bogey, and then failed to birdie the 18th.

No matter. He was tied for the lead, in the final group going into Sunday’s third round. That wasn’t all that surprising.

Walker played in Asia in November, and then he played twice in Florida during December. So even though he took his family to Utah over Christmas, he arrived to Maui last week feeling ready to go.

Hideki Matsuyama and Charley Hoffman each shot 66 for the low rounds Saturday, leaving them in the group a shot out of the lead. Hoffman ran off seven birdies in an eight-hole stretch to share the lead, only to hit into the hazard on the 17th for a double bogey. He bounced backed with his seventh birdie of the back nine.

Hoffman was the last player to qualify for this winners-only event with a victory in Mexico in November.

“Second round of the year, just trying to get my feet wet,” Hoffman said. “Made a bunch of birdies, hit a lot of good shots, and one unfortunate swing. You can get away with a few bad swings out here, but not on the 17th hole.”

Canada’s Nick Taylor started the day with a share of 12th, but couldn’t pick up any ground Saturday after carding an even par 73. He dropped into a tie for 24th at 4-under.