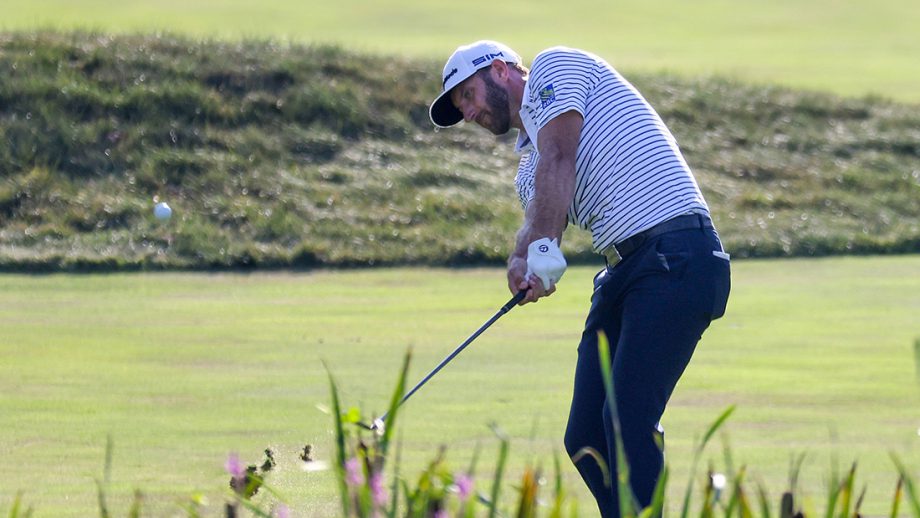 NORTON, Mass. – Dustin Johnson could have used a finish like this for a record score. The birdie-eagle ending to his round Saturday at The Northern Trust gave him a 7-under 64 and stretched his lead to five shots in the FedEx Cup playoffs opener.

Johnson, coming off a remarkable day in which he was 11 under through 11 holes and finished with seven pars for a 60, pulled away from Harris English and Scottie Scheffler with a 20-foot birdie putt on the 17th and a 40-footer for eagle on the closing hole at the TPC Boston.

“I’m in a great position and like where I’m at, but I’m still going to have to go out and shoot a good score,” Johnson said. “You can go low out here and guys are going low every day, especially with the conditions we have – perfect greens, golf course is in great shape and not a lot of wind.”

English had three birdies in a four-hole stretch early on the back nine and was tied for the lead when Johnson made his lone bogey of the round on the 13th hole when he failed to get up-and-down from a bunker.

English, however, followed with consecutive bogeys when he missed the green well to the right of the water on the par-3 16th, and three-putted from 70 feet on the 17th. He missed a third consecutive putt from 7 feet or closer, the last one for birdie, and had to settle for a 66.

Scheffler closed with a birdie to follow his second-round 59 with a 67. He played in the final group with Johnson, just like he did two weeks ago on the final day of the PGA Championship.

Even so, they’re five shots behind Johnson, who is going for his second victory of the year and could go to No. 1 in the world – provided Jon Rahm doesn’t finish second – for the first time since May 2019.

“Try to make as many birdies as I can and see what happens,” English said.

Louis Oosthuizen (68) was seven shots behind, and his best hope now would appear to be moving into the top 70 who advance to the second playoff event next week at Olympia Fields south of Chicago.

Tiger Woods predicted Friday there would be low scoring in the third round, and he was right – just not from him or Rory McIlroy, a star pairing for the breakfast hour. Woods birdied the last hole for a 73. McIlroy made two triple bogeys in his round of 74. They get to play again Sunday morning.

Johnson will be going for his fifth FedEx Cup playoff victory, and third in this event on a third course. What matters more is how he finishes the season. The FedEx Cup already features some of the best players in golf – Woods, McIlroy, Vijay Singh, Justin Thomas and Jordan Spieth among them – and Johnson wants to be on that list.

Johnson set the target with four birdies in eight holes before heavy rain moved in and halted the third round for 45 minutes. It also softened a TPC Boston that was getting slightly firmer.

He came back and hit to tap-in range for birdie on the 12th, and the had the great finish.

Johnson needed a birdie on the 18th on Friday for his first 59, and said he regrets hitting driver off the tee with a shot that tumbled down a small slope into the rough. Lesson learned? Not really. With the rain, he opted for driver again, teed it low and hit this one perfect, setting up a 5-iron to the green and his long eagle putt.

Mackenzie Hughes of Dundas, Ont. had the best score among Canadians Saturday. Hughes shot a 5-under 66 to bring him to 11-under. He moved up 14 places on the leaderboard, putting him in a tie for 15th place with three other golfers. Corey Conners of Listowel, Ont. is tied for 34th place at 7-under.