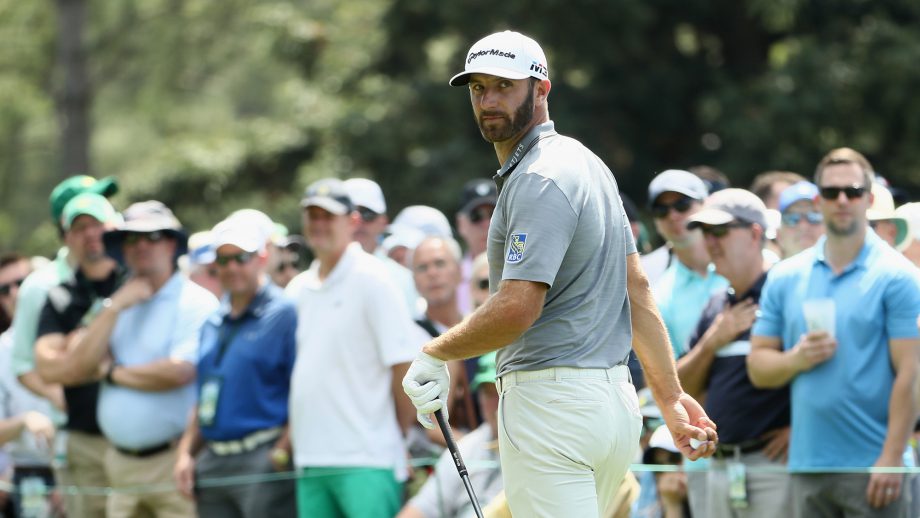 AUGUSTA, Ga. — The recovery from the back injury took a lot longer than he imagined, longer than the sting of having to miss the Masters.

Dustin Johnson, with a history of misfortune in the majors, has a remarkable knack of moving forward.

If only everyone would quit reminding him.

“I get asked about it every day out here on the range or walking down the fairway,” Johnson said. “So I’m reminded all the time.”

The back injury getting most of the attention at this year’s Masters belongs to Tiger Woods, and for good reason. It was far more severe, requiring four surgeries over four years, the last one fusion in the lumbar area. More than keeping Woods from playing Augusta National three of the last four years, he hardly played at all.

Johnson’s injury was a freak accident at the worst time.

He had won his last three tournaments against three of the strongest fields of the year, which not only elevated him to No. 1 in the world, it made him the biggest favourite at the Masters since Woods was at his peak.

Then 24 hours before he was to tee off, calamity struck.

Johnson was still wearing socks after returning home from the gym. It was raining. His son was headed back from day care, so he ran downstairs in his rental home to move the car. The stairs were wooden, a bad combination with socks. Johnson slipped and crashed down the stairs, wrenching his back. His brother, Austin, was the first to reach him and still recalls the wild eyes of his older brother looking up at him.

Johnson tried to loosen up on the range. He went to the putting green. And then he had no choice but to withdraw.

“It was just a freak thing, and it happened. There’s nothing I can do about it except I’m here this year,” Johnson said Tuesday. “Hopefully, I can tee it up on Thursday. Definitely be looking forward to that.”

One year later, so much has changed. Johnson remains No. 1 in the world for the 59th consecutive week — only Woods (three times), Greg Norman (twice) and Nick Faldo have held the No. 1 ranking longer.

But he hasn’t won since the first tournament of the year, an eight-shot victory at Kapalua. He came close at Pebble Beach until Ted Potter Jr. beat him in the final round. He was not particularly close in his last start, losing all three matches in his group at the Dell Technologies Match Play.

He’s not worried about that, either, because Johnson doesn’t worry about much.

“Last year I was about as confident as I’ve ever been, so it was probably a 10,” he said when asked to compare his confidence level on a scale of 1 to 10. “This year it’s probably a 9 1/2. Starting to swing it a lot better. Feeling a lot better on the golf course, for sure.”

Just don’t get the idea there is any additional motivation. Johnson doesn’t look back.

“Why?” he asked. “There’s nothing you can do about it. Hopefully, I can get myself in a position where I have a chance to win. Last year has nothing to do with anything happening right now.”

What’s happening at this Masters is a wide-open race for the green jacket. Rarely have so many top players been on top of their games coming into the first major of the year, including past champions Phil Mickelson, Bubba Watson and Jordan Spieth.

Not to be overlooked is Woods, who hasn’t won this year but has shown he is plenty capable.

“I think that this year it feels like you probably have eight or 10 guys that are in good form, with a really good, solid chance of winning,” defending champion Sergio Garcia said. “So it’s kind of interesting to see how the week goes on, because every week is a different story. But at the moment, it’s quite exciting.”

Along with a green jacket, the No. 1 ranking is up for grabs.

Justin Thomas (No. 2), Jon Rahm (No. 3) and Spieth (No. 4) all have a reasonable chance to replace Johnson at No. 1 if they were to win. Thomas and Rahm already have had chances this year. Rahm needed to win at Torrey Pines and was one shot behind going into the weekend until he closed with rounds of 75-77. Thomas only had to win his semifinal match Sunday morning at the Match Play against Bubba Watson. He says he thought too much about No. 1 and it cost him.

Johnson, already home in Florida at that point, didn’t even bother watching. He was on his boat. There was nothing he could do about it.

He is proud of the No. 1 ranking, mainly for reaching the top.

“But most importantly, I want to stay here,” he said. “To do that, I’ve got to keep pushing myself and keep working hard.”

That starts with getting to the first tee on Thursday. Johnson was on the range Tuesday afternoon trying to sharpen his wedges. There is one more day of practice, a short day because of the Par 3 Tournament. Johnson already had plans for Wednesday.

“I’m going to take it really easy,” he said.