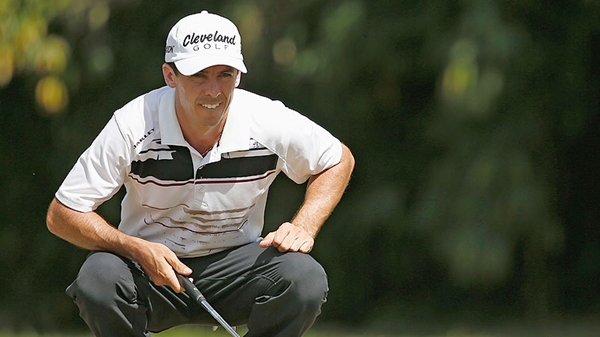 SAO PAULO – Jon Curran completed a wire-to-wire victory Sunday in the Web.com Tour’s Brazil Champions, closing with a 2-under 69 to beat Alex Cejka by four strokes.

Curran finished at 25-under 259 at Sao Paulo Golf Club and earned $144,000 for his first Web.com Tour title in only his fourth start. The 27-year-old former Vanderbilt player opened with a course-record 61 and added rounds of 64 and 65.

“I kept thinking to myself all day that I wasn’t nervous, I was just anxious,” said Curran, who led by four at the start of the day. “I said to myself that it was going to be OK if I wasn’t in the lead at some point, I just wanted to have a chance on the back nine.”

Cejka, the winner of the season-opening Colombia Championship last month, also shot a 69. He earned $86,400 to push his total to $221,400, more than enough to wrap a spot next season on the PGA Tour.

Ash Hall was another stroke back after a 70.

Curran, from Hopkinton, Mass., had a tour-record eight consecutive birdies in first round, had the second-lowest 36-hole score in tour history at 125, matched the lowest 54-hole mark at 190 and tied for fifth-best total.

“Somebody once said that you’re going to face something in the final round that you haven’t faced all week,” he said. “The guys who win deal with it and the guys that don’t, don’t win.”

Toronto’s Albin Choi lead the Canadians this week, finishing tied for 26th at 10-under 274.

Adam Hadwin followed up his first Web.Com Tour win last week with a tie for 65th this week. The Abbotsford, B.C. native finished with a 4-under 280.

Mackenzie Hughes of Dundas, Ont. was a stroke back of Hadwin at 3-under 281. He finished tied for 68th.