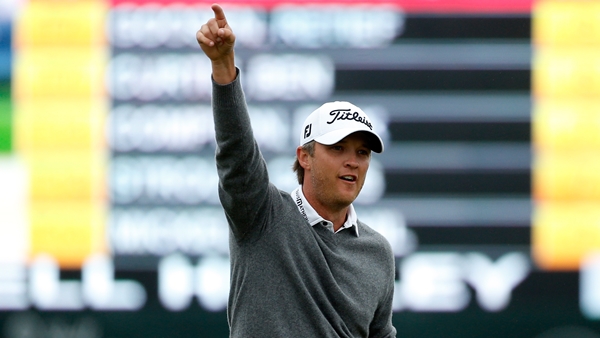 HUMBLE, Texas – Matt Jones earned his first trip to the Masters with a remarkable 42-yard chip-in on the first playoff hole, outdueling Matt Kuchar on his way to winning the Houston Open on Sunday.

The win is the first on the PGA Tour for the Australian, who made a 46-foot birdie putt on the 72nd hole to reach the playoff. He ended it one hole later, chipping over the right front bunker on the 18th and watching it roll in.

Kuchar, who bogeyed the final hole of regulation, then missed his bunker shot to give Jones the win – earning him nearly $1.2 million and a trip to Augusta National.

Jones, who began the day six shots back of Kuchar, shot a final-round 66 and ended the tournament 15 under overall.

In September, Jones lipped out an 8-foot birdie putt on the last hole of the BMW Championship – a putt that would have earned him a trip to next week’s Masters by sending him to the Tour Championship.

He waited until the last possible moment to make amends for that miss on Sunday, doing so in impressive fashion.

Jones sent his tee shot on the first hole of the playoff into the right fairway bunker. He then landed just short of the greenside bunker with his second shot, while Kuchar found the bunker from the fairway.

It was the second straight miss of the 18th green from the fairway for Kuchar, who sent his fairway metal on the 72nd hole into the water before recovering to make bogey and reach the playoff.

Jones didn’t leave Kuchar any room for error in the playoff, sending his chip over the greenside bunker and watching as it rolled in – much to the delight of the Golf Club of Houston gallery.

Golfers were sent off in threesomes early Sunday morning for the second day in a row because of the threat of strong storms in the Houston area. The rain, heavy at times, began early during the final pairing’s round, but the pros finished without any delays.

Kuchar started the day with a four-shot lead over Garcia and Cameron Tringale, but he bogeyed the first hole and was 1 over on the front nine.

That allowed Jones, who began the day at 9 under, to briefly tie for the lead at 14 under following a birdie on the par-4 11th.

Kuchar answered moments later with a 12-foot birdie putt on No. 10. The putt gave him a one-shot lead at 15 under, a lead that seemed solid until the final hole of regulation.

With Kuchar watching from the tee, Jones bounced back from a bogey on the 17th to make a 46-foot birdie putt on No. 18. That sent him to 15 under overall, one shot back of the lead.

Kuchar hit the fairway before his second shot found the water – opening the door for Jones to earn the win and his improbable trip to next week’s Masters.

It was the second straight final-round disaster for Kuchar, who shot a 75 in the final pair of last week’s Texas Open on his way to finishing fourth.

Garcia finished in third at 13 under, while Tringale was fourth at 12 under.

Rory McIlroy matched the low round of the tournament with a 7-under 65 on Sunday, finishing tied for seventh at 8 under overall.

Phil Mickelson, who won the tournament in 2011, was 1 under on Sunday and finished 7 under overall in a tie for 12th – a week after he was forced to withdraw from the Texas Open because of a muscle pull in his right side.

Graham DeLaet climbed four spots up the leaderboard Sunday thanks to a 2-under 70. The Weyburn, Sask. native finished 5-under-par, leaving him tied for 19th with four others, including Jonathan Byrd and former Masters champion, Charl Schwartzel.