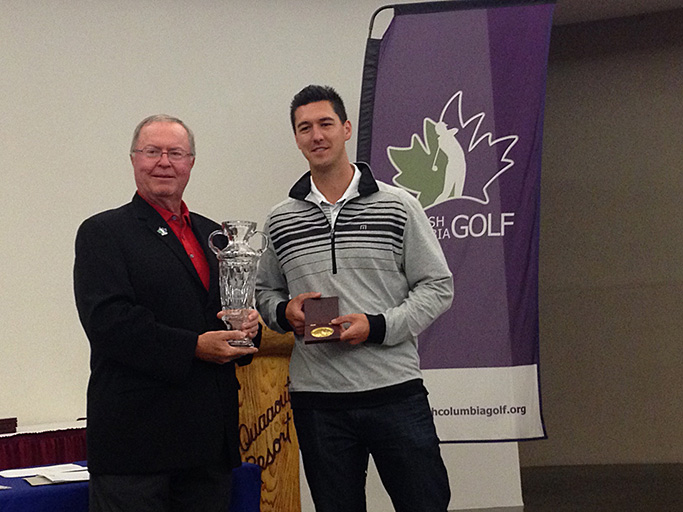 Relentless rain in Chase, B.C., on Thursday forced the 2015 British Columbia Golf Mid-Amateur and Mid-Master Championship to be shortened to a 36-hole competition.

After the final round of play at Talking Rock Golf Club was cancelled due to the weather conditions, Jordan Belton was crowned the British Columbia Mid-Amateur Champion and Lance Lundy was awarded the Mid-Master title.

“The course was unplayable. There was excessive water in the fairways,” said Susan White, Senior Manager, Field Operations for British Columbia Golf. “To have played would have not been good for the course or the players.”

White and her tournament team surveyed the course just before 6 a.m. and deemed it unplayable shortly after. The respective leaders were then awarded their provincial titles at a presentation ceremony Thursday morning.

The Vancouver Golf Club’s Jordan Belton won the Mid-Amateur title and the Hans Swinton Trophy, with a score of 1-over-par 143. Two strokes behind, in a tie for second place were Shaughnessy Golf & Country Club’s Patrick Weeks and Tobiano Golf Club’s Adam Kernan.

The team comprising of Belton, Weeks and Kernan will represent British Columbia at the 2015 Canadian Men’s Mid-Amateur Championship, being held Aug. 25-28 at the Abercrombie Golf Club in New Glasgow, N.S.

Belton, who was playing his second Mid-Amateur after finishing 12th last year, credited his trainer, Nick Mueller of Innovative Fitness for helping him to get into better shape. He joined the Vancouver Golf Club giving him the opportunity to play a lot more golf.

“Nick has really worked with me and in the last year, I’ve been out playing about twice a week,” said Belton, who works in the financial investments industry. “My wife started a home décor business and that’s given me more time to golf. It’s also great that with my work, I have the flexibility to get out and golf with clients and mingle with prospective clients.”

Lance Lundy also had mixed feelings about winning the Mid-Master after the final round cancellation.

“It’s unfortunate we weren’t able to play the final round,” said Lundy. “I knew there was a lot of standing water yesterday and with all the rain that’s come down since, there wasn’t much more the course could take. Nobody likes to win like this, but you take what you’re given. It would have been nice to have the opportunity to make a move toward winning the Mid-Am, but it was fun coming out to play with the guys and give these young guys a run for their money.”

There was also a “Best-Ball Competition” where players may make up their own 2-man teams from the field. This championship is a best-ball conducted over 54-holes but was also shortened due to the weather conditions.

The winners of the Best-Ball Competition were Norm Bradley and Lance Lundy. In second place was the team of Daniel Brown and Bryan Toth and in third place were Tyson Burch and Jay Snyder.

The 2016 British Columbia Golf Mid-Amateur and Mid-Master will be contested at the Nanaimo Golf Club in Naniamo, B.C.