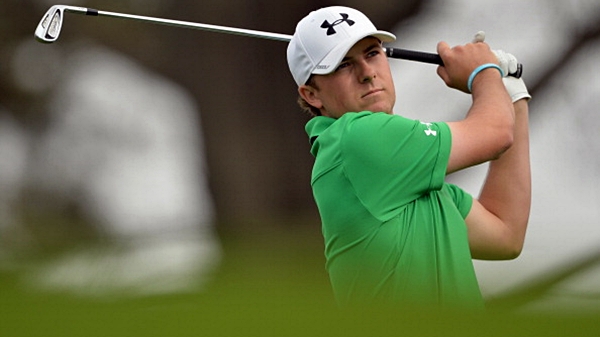 SAN DIEGO – Jordan Spieth turned out to be the star attraction Friday playing with Tiger Woods at Torrey Pines.

Spieth again showed game well beyond his 20 years with a 9-under 63 on the North Course, giving him a one-shot lead over Stewart Cink going into the weekend at the Farmers Insurance Open. Cink drilled a 3-wood from 280 yards onto the green at the par-5 ninth on the tougher South Course for a two-putt birdie and a 71.

Woods rarely gets upstaged at Torrey Pines, where his eight professional wins include the 2008 U.S. Open.

But in his first competition in six weeks, Woods hardly looked the part as the defending champion. He did not make birdie on any of the par 5s for the second straight day, and a three-putt bogey on the par-5 ninth hole on the North gave him a 71.

He was nine shots behind.

Phil Mickelson’s ailing back wasn’t much better, though Lefty plodded along and shot 73 on the South to finish eight shots out of the lead. Mickelson contemplated pulling out to rest his back, and said only that he would give it a shot Saturday depending on how he felt.

It was the first time Spieth has played with Woods in a tournament – they played a practice round together at the Presidents Cup last fall – and the Texan felt and played as if it was any other round on the PGA Tour.

Then again, the first time he played with Mickelson, Spieth closed with a 62 at the TPC Boston last year, a round that led Mickelson to call Presidents Cup captain Fred Couples and lobby for Spieth to be picked for the team.

In both cases, Spieth was more interested with the score than the audience.

“Any time you can shoot a lower score than a 66 or 65 and you can really get it deep and be in a zone and not worry about what your score is … that’s special,” Spieth said. “That’s proving that I can play my best golf when it matters on a PGA Tour venue. Each time you can do that, you get more and more confident that you can do it more often.”

As for playing with Woods? He only shrugged.

Spieth grew up watching, idolizing and being amazed by Woods. But this was only a Friday.

“They were both rounds that I needed to move up the leaderboard,” he said about playing with Woods this week and Mickelson last year. “They weren’t in the last couple groups on Sunday, so they weren’t to win. They were to get myself up and in a position.”

Spieth was at 10-under 134 and will be in the last group Saturday with Cink and Nicolas Colsaerts, who shot 67 on the South and was two shots behind.

“I’m looking forward to playing with Jordan. I’ve never seen him hit a ball, so that will be fun,” Cink said. “It’s always exciting to see the young guys play. I’m playing really well. I’m really excited about golf right now and the way I’m playing. I’m having some fun out there and seeing a lot of good things.”

The final two rounds will be on the South, which is about 600 yards longer and on Friday played more than 4 1/2 shots harder.

Spieth didn’t hit the ball better than his opening-round 71 on the South. His putter made the difference. He rolled in a bending 18-foot birdie putt on the 10th hole and his confidence grew up there. He avoided a three-putt on the 17th by making a 15-footer for par, and he really took off down the stretch. He holed another sidehill birdie putt on the par-3 sixth from about 20 feet, and he made a 15-footer for his final birdie on the eighth hole. The rest of his birdie putts were inside 4 feet.

“The kid’s got talent,” Woods said. “He hits it a long way, phenomenal putter. He made a boat load of putts today from the 10- to 20-foot range, and on poa greens, that’s not easy to do. He was pouring them in there. He had speed to them, too. That’s what you have to do to putt on poa.

“He putted with a lot of confidence.”

That wasn’t the case for Woods, whose only birdies came on his opening hole and on his sixth hole, a flip wedge to 4 feet. He didn’t feel like he was off by much, but that’s all it took. The course is set up in such a way that the thickest grass is just off the fairway.

“I wouldn’t say it’s rusty,” Woods said. “I was just a fraction off, and at this level and on golf courses like this, if you’re just a fraction off it doesn’t take much, especially as tight as the North Course is. I had so many balls that landed in the fairway that went in the rough. Now I can’t be aggressive, I’ve got to play conservative into some of these flags. When you should be able to fire at some of these flags, I just couldn’t.”

The cut was at even-par 144, and 83 players advanced. There will be another cut to top 70 and ties after the third round.

Woods wasn’t ruling himself out just yet. He remembered the time he made the cut by two shots in 1999, and then had a 62-65 weekend to win by two shots. But that was before the South Course was lengthened. No had better than 67 the first two days this week on the South.

Brad Fritsch got around Torrey Pines 2-under par and is tied for 11th, 5-shots back of Spieth. The Ottawa native almost recorded the shot of the day, nearly holing his tee shot on the 201 yard, par-3 16th hole.

Graham DeLaet was the other Canadian to make it to weekend play in California. The Weyburn, Sask. native dropped 21 places Friday after shooting a 1-over 73. He’s tied for 50th 1-under with Woods.

Mike Weir withdrew Friday due to a neck injury. He’s reported to have had three days of physiotherapy to treat the problem. He was 5-over after the opening-round.