Jordan Spieth struggles in first round since Masters win 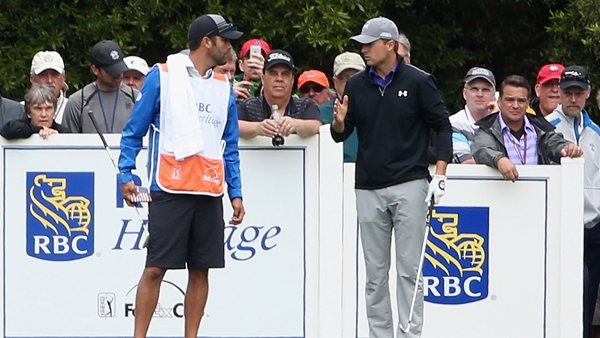 HILTON HEAD ISLAND, S.C. – It’s been quite some time since Jordan Spieth had to explain a performance this poor.

The Masters champion had a post-Masters letdown in the opening round Thursday, shooting 3-over 74 to end his run of 16 straight rounds under par. He blamed it all on himself – and not the two-day celebratory media tour in New York this week.

“I didn’t drive the ball well, didn’t particularly strike my irons well. My chipping and putting weren’t there,” he said. “It was just an off day.”

And the sort of performance that stands in stark contrast with how Spieth played the past month. He won the Valspar Championship, finished second at the Texas Open and lost a playoff in the Houston Open before capturing the green jacket and his first major championship at Augusta National.

It was a lot to ask of anyone to come back just as strong, let alone a 21-year-old who hadn’t gone through it before.

“No excuses, I just didn’t have it today,” he said.

He better have it on Friday if he hopes to hang around for the weekend. Spieth stands eight shots behind Graeme McDowell and Matt Every, tied for the top at 5-under 66.

“Got a good feeling about tomorrow,” Spieth said. “Feel like I got some swings in, got in somewhat of a rhythm and can at least go out and feel the shots.”

Don’t bet against the young Texan.

He got into Sea Pines Resort late Tuesday night after some 25 appearances and interviews in New York, including an appearance with David Letterman and seeing the view atop the Empire State Building. He acknowledged his preparation this week had suffered.

Spieth was greeted by a large gallery on the first tee, crowds five and six deep stretching cellphones to snap pictures and get video footage. “Way to go, Jordan,” someone shouted after his tee shot.

The applause continued throughout the round and, while Spieth appreciated the sentiment, had difficulty concentrating on his game.

“I was upset about missing the green and then there was a standing ovation walking up,” he said. “It’s like, `Thank you. I just hit a terrible shot. Thanks.’ So it was kind of tough to find the balance there.”

It was clear, though, this would not be the Spieth who tied the Masters’ scoring mark of 18-under 270 set by Tiger Woods in 1997.

He was in perfect position on the par-5 second, which played the easiest in round one, when he left his approach shot short and in the bunker. Spieth could not make an 8-footer to save birdie. He was short of the green again on the par-4 sixth hole, leading to the first of three bogeys – Spieth had just one bogey in his first 36 holes at Augusta National.

The wheels truly came off at the par-3 14th when Spieth hit into the water and watched his third shot spin back about 15 feet from the cup. He made a double-bogey 5.

He hasn’t had many days like this in 2015 – and neither had McDowell, who hadn’t shot lower than 71 in his previous 12 rounds, including all four at last week’s Masters when he tied for 52nd.

McDowell, though, found his game on the layout’s tight fairways and small greens. He had six birdies after an opening bogey to move in front.

“It was great to feel comfortable out there today, see my lines, hit my speeds and make a few putts,” said McDowell, who has not won on tour since taking this title in 2013.

It’s been a strange season for Every, who won the Arnold Palmer Invitational last month yet hadn’t finished better than 27th in any of his 11 other events.

After Bae, defending champion Matt Kuchar led a group of five another stroke back at 68. Ian Poulter and former British Open winner Louis Oosthuizen were in a group of 12 at 69.

Canada’s Graham DeLaet opened with a 2-under 69 for a share of 9th spot.

Team Canada’s Young Pro Squad member Corey Conners, playing in his first event as a professional, had a 77.