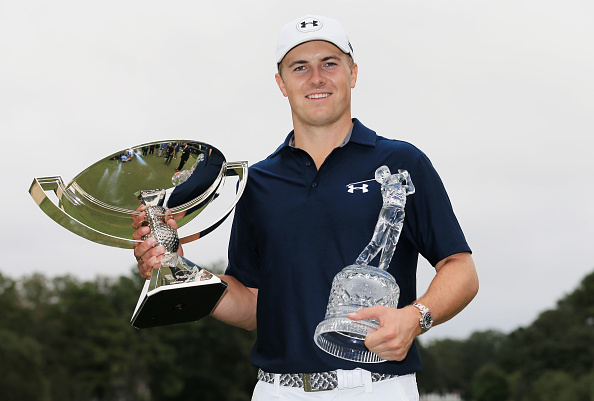 ATLANTA – Jordan Spieth treated the Tour Championship as if it were a major. He played like it was, too.

Looking for a fitting finish to a sensational season, Spieth poured in putts from all over East Lake and never gave Henrik Stenson or anyone else much of a chance Sunday. His final stroke was an 8-foot par putt that was right in the heart for a 1-under 69, and he leaned back with a smile of pure satisfaction.

The 22-year-old Texan became golf’s first $22 million man – a PGA Tour record with just over $12 million in prize money, and the $10 million bonus for the FedEx Cup.

“This is incredible,” Spieth said. “This is an event where we approach it like a major championship because we know this is possible at the end of it.”

Even when he missed back-to-back cuts to start the FedEx Cup playoffs, Spieth spent the month trying to peak for the most important event in the lucrative series. He was the first to show up at East Lake on Monday to start grinding on his game. And with a one-shot lead going into the final round Sunday, he was on the putting green three hours before his tee time for what caddie Michael Greller called the “early grind.”

“We only do this at the majors,” Greller said.

It all paid off so handsomely, especially that putter.

“Eleven was a dagger,” Spieth said.

At that point, Stenson could only smile and bump fists with Spieth.

“You can’t expect him to make it,” Stenson said after a 72. “You’re feeling like you got a good chance to make up some ground. But he just poured that one in the middle. It’s fun to watch and just say, `Well done.’ The best player this week won the tournament, won the FedEx Cup.”

And if that wasn’t enough, Spieth went back to No. 1 in the world.

The first person to greet him was his little sister, Ellie, who keeps Spieth and the entire family so grounded in light of so much success. His parents, girlfriend, grandfather and a tight group of high school friends from Dallas were there to watch another amazing performance in a year filled with him.

Spieth became the youngest player since Horton Smith in 1929 to win five times in a season, and the youngest to claim the FedEx Cup title.

“It’s been a phenomenal year for him,” Stenson said. “I watched it firsthand at the first two rounds at Augusta, and he played phenomenal and putted phenomenal. And it was the same putting display, really, today – just an exhibition on the greens, to be honest.

“His putting and mental focus is the best in the world. It’s hard to argue that.”

And there’s no longer an argument for PGA Tour player of the year.

Jason Day had five victories, including his first major at the PGA Championship, and there was talk a sixth win and the FedEx Cup might put the Australian in the discussion. Not anymore. Spieth made a spirited bid for the Grand Slam and joined Jack Nicklaus and Tiger Woods as the only players to finish no worse than fourth in all the professional majors. Along with the money title, he won the Vardon Trophy for the lowest adjusted scoring average.

The only question he couldn’t answer was what he will do for an encore.

“This is one I cannot wait to celebrate,” he said.

Stenson made a $1 million putt of his own, though it was the least he could do. He was three shots behind when he shanked his shot from the 17th fairway and made double bogey. That dropped him into a four-way tie for fourth and cost him a spot in the FedEx Cup ranking. But he bounced back with a 60-foot birdie putt on the 18th to go back to No. 2 in the FedEx Cup to earn a $3 million bonus (instead of $2 million for third).

Stenson had three runner-up finishes in the postseason, and he has five for the year without winning. He still has events left on the European Tour.

But this week – and year – was all about Spieth.

“It’s the greatest season I’ve ever had, obviously,” Spieth said. “But it’s one where I believe we took our game on course and off course to a level that I didn’t think would be possible at different times in my life.”