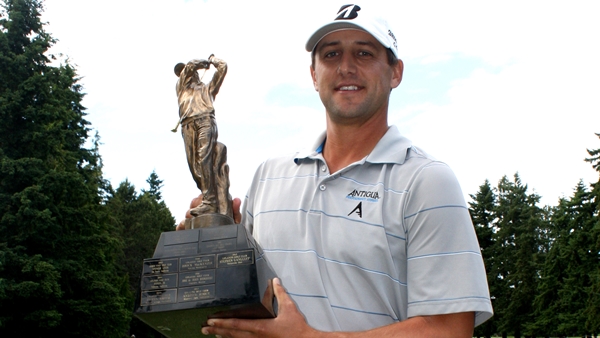 The 30-year old University of Minnesota graduate converted a tricky two-putt on the 18th green at Uplands to win by one over 2010 winner Brock Mackenzie of Washington and PGA TOUR Canada rookie Tim Madigan of New Mexico. The win moves Persons to no. 2 on the Order of Merit behind PC Financial Open champion Joel Dahmen.

“I made some big putts. Things went my way today,” said Persons, who added that the win gives him a whole new outlook on the rest of the season. “It sets you up in a great spot. It puts you near the top of the list. It can’t be better than to get a win.”

Persons came into Sunday’s final round with a two stroke lead over Madigan, Mackenzie and playing partner Garrett Sapp of California, a position he had experience with on the Web.com Tour, where he held a one shot lead through 54 holes at the 2012 Neediest Kids Championship. While he fell to a 77 and a tie for eighth in that event, there would be no faltering from Persons on Sunday in Victoria.

“That stuff has kind of taught me a lot,” said Persons. “I had a lead on the Web.com Tour and I didn’t finish it off. Last night I slept on the lead and I think those experiences helped me today.”

After making the turn with a 2-under par 33, Parsons carried a three-shot lead early in the back nine before three bogeys whittled his lead away to a single stroke. But a pair of long range two-putts on the final two holes, coupled with a missed Madigan six-footer for birdie at 18 that would have tied the lead, gave Persons all the breathing room he would need to claim his first career PGA TOUR Canada win.

“It’s always fun. It’s where you want to be,” said Persons of dealing with the Sunday pressure. “Of course you’re nervous and of course you don’t want to mess it up, but having fun is what it’s all about. That’s why we’re here. I enjoy it. I want to keep doing it.”

Madigan’s tie for second was a career best in just his second PGA TOUR Canada start, while Brock Mackenzie posted his best PGA TOUR Canada finish since winning at Uplands in 2010. One shot further behind were Langley, British Columbia’s James Allenby, Florida’s Michael Buttacavoli, Ohio’s Wes Homan and Florida’s Olin Browne, Jr., who finished in a tie for fourth for the second consecutive week.

ALLENBY TAKES TOP CANADIAN AWARD
Langley, British Columbia’s James Allenby carded a final round 68 to finish at 10-under par and in a tie for fourth, earning him Freedom 55 Financial Canadian Player of the Week honours. The 29-year old earned his first top-10 of the season and the eighth of his PGA TOUR Canada career.

PERSONS MOVES UP ORDER OF MERIT
With the win, Josh Persons moves up to second on PGA TOUR Canada’s 2014 Order of Merit. Below are the top five through the Bayview Place Island Savings Open presented by Times Colonist (bold denotes Canadian):