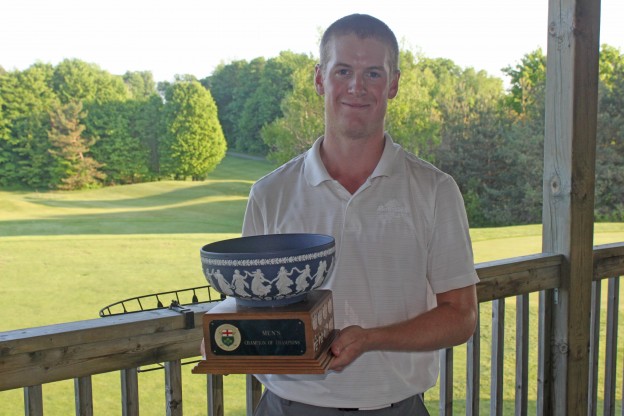 BARRIE, Ont. — It was a beautiful day at Horseshoe Resort – Highlands Course as 48 champions, from Ontario golf clubs, teed it up for the Golf Association of Ontario’s (GAO) Ontario Men’s Champion of Champions.

In what is turning out be a theme with GAO events this season, this championship needed a playoff to determine a winner. Despite many players having difficulty with the course, Oakville’s Mike Kray and Bognor’s Josiah Dixon both managed to finish the round one-under (70).

On the playoff hole, Kray, from the St. Catharines Golf & Country Club found the rough on his tee shot and had tree branches between his ball and the hole. He would get out and on the fairway but was short of the green. He would go on to bogey the hole. As for Dixon, he put his tee shot in the fairway and found the fringe with his approach. The Legacy Ridge Golf Club member, chipped it to within a couple feet and made his par putt for the win.

“It feels good, I really enjoyed the course it was in great shape,” said Dixon. “I had a pretty good day out there, I struck the ball well. I probably should have made a few more putts than I did, but overall it worked out well. I hit fairways and greens. That was what you really had to do out there. I didn’t have to look for the ball except once and even then I was able to make par.”

For Dixon, this was his first GAO championship, a win that he said tops his list. “I haven’t won any GAO events before. I have won a couple Amateur Tour events, but overall this has to be my biggest win.”

Earning the bronze medals were Whitby’s Spencer Dobbs, from the Cherry Downs Golf & Country Club and Wasaga Beach’s Dean Henry, from the Mad River Golf Club. Both Dobbs and Henry finished the round two-over (73).

With his win, Dixon also receives an exemption into the Investors Group Ontario Men’s Amateur Championship July 14-17 at the Peterborough Golf & Country Club.