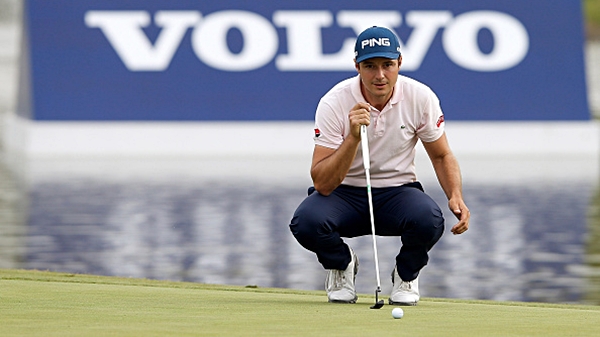 SHANGHAI – Julien Quesne shot a 5-under 67 Friday to take a one-stroke lead over defending champion Alexander Levy and Peter Uihlein after the second round at the Volvo China Open.

The Frenchman, a two-time winner on the European Tour, had six birdies and one bogey for an 8-under 136 overall score.

“We had less wind today so it was a little bit easier,” Quesne said. “I don’t miss many shots so I was very confident.”

Levy (68) was also playing confidently, making three straight birdies on the back nine to take a one-stroke lead at 9 under. But he tried to hit out of a bunker with an iron on the par-4 16th and went into the water, taking a double-bogey.

Then, on the par-3 17th, Levy hit into the bunker off the tee and two-putted for bogey. He got one stroke back with a birdie on the 18th – his seventh of the day.

“It’s a shame to make a double because I played really good today,” Levy said. “Maybe next time I do a different thing, a more safe play out of the bunker on the right, but it’s OK.”

Levy joked that he might make a bet with Quesne on who will perform better this weekend, but his friend still owes him 10 euros from a wager they made last week at the Shenzhen International about a shot that eventual champion Kiradech Aphibarnrat hit on the final day.

“Maybe tomorrow I ask him on the first tee. Maybe he give it to me,” the Frenchman said.

Uihlein finished his round with an iron shot over a water feature on the par-5 18th that rolled straight into the hole for eagle. It was only the second eagle of the day on the difficult greens at Tomson Golf Course.

“It’s funny you can go for really all of (the par 5 holes). I’ve gone for all of them this week,” the American said. “They’re really small, undulating greens. … You can see from the scoring, it’s a tricky little course.”

Both Quesne and Uihlein are coming off solid performances last week in Shenzhen, where they tied for fourth. Levy finished last season on a roll with a win at the Portugal Masters and a tie for second at the BMW Masters, but he’s yet to get a top-10 result this year.

Manassero is trying to recapture the form that saw him become the youngest winner in European Tour history at 17 in 2010. The Italian said his game hit a low point over the past eight months when he failed to crack the top 40 at any tournament and missed five straight cuts to start the year.

He said he started to turn things around last week in Shenzhen, where he finished in a tie for 29th.

“I don’t want to say I’m out of the woods but I’m definitely in a much better path,” Manassero said. “I can still miss, but one mistake doesn’t drag me into something that leads to other mistakes. I can handle it. Probably that right now is what makes all the difference.”