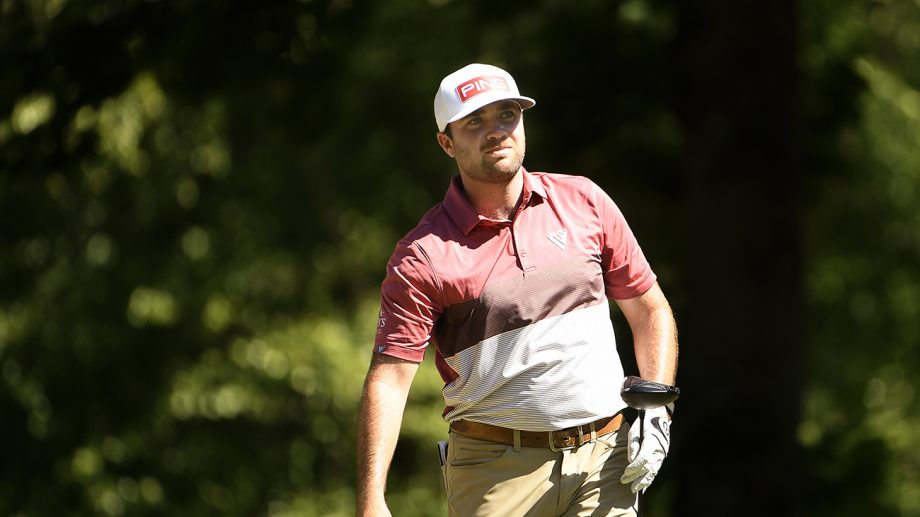 RALEIGH, NC - JUNE 05: Stuart Macdonald of Canada watches his tee shot on the seventh hole during the third round of the REX Hospital Open at The Country Club at Wakefield Plantation on June 5, 2021 in Raleigh, North Carolina. (Photo by Tracy Wilcox/PGA TOUR via Getty Images)
Korn Ferry Tour Communications

GREER, S.C. – Justin Lower followed up a first-round 64 at The Cliffs Valley course with a second-round 63 at the Thornblade Club to take a one-stroke lead at 16-under at the BMW Charity Pro-Am presented by SYNNEX Corporation as play was suspended due to inclement weather. The second round will resume at 7:15 a.m. on both courses with the third round to follow after the conclusion of the second round.

“I think this is my fifth year here, so it’s about time I figured it out,” laughed Lower of his past history at the tournament. “I’ve been playing well all year and just haven’t gotten the putter going. I started to get it going over the last month or so a little more and it’s starting to really show now.”

Lower, a 32-year-old from Canal Fulton, Ohio, has birdied half of his 36 holes thus far, three more than any other player in the field. On Friday, he tallied six birdies on his back nine on his way to a closing 5- under 36 and 8-under 63 total.

While his scoring holes have been notable, Lower credited a par at the par-5 second hole early in his round as the catalyst.

Lower entered the week 37th in the Korn Ferry Tour points standings with eight tournaments remaining. In 2018, Lower experienced heartbreak at the final event of the season, the Korn Ferry Tour Championship presented by United Leasing & Finance. He was hovering around The Finals 25 bubble coming down the stretch before facing an eight-foot birdie putt at the 72nd hole. A birdie would have earned him his first PGA TOUR card but Lower missed on the low side and finished 26th, missing out on TOUR membership by one slot.

“I want that PGA TOUR card,” said Lower, a Malone University alum. “Hopefully it’s not just that, it’s more than that, but my game feels good. Every year I’ve made a steady improvement so hopefully I keep trending in the right direction and it will happen eventually.”

Last week’s champion Mito Pereira sits one stroke back at 14-under in his bid to go back-to-back and earn his third victory of the season and an immediate promotion to the PGA TOUR. Michael Miller, the runner-up at the last BMW Charity Pro-Am presented by SYNNEX Corporation, sits even with Pereira at 14-under.

Canadian Stuart Macdonald is tied for seventh at 11-under with two holes still left to play. Fellow Canadians Ben Silverman and Albin Choi are tied for 25th and 85, respectively.