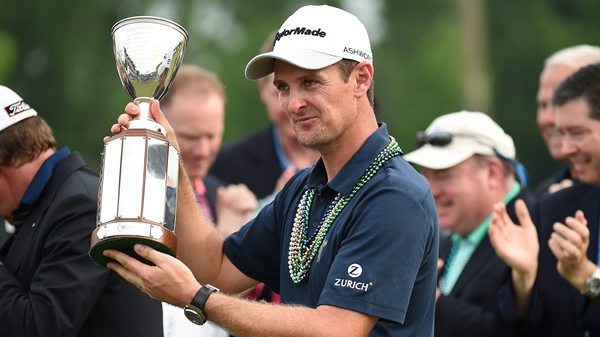 Sensing he needed to birdie the final two holes to keep the lead, Rose pulled it off with aggressive swings and clutch putts for a one-stroke victory over Cameron Tringale on Sunday in the Zurich Classic.

“Earlier this year it looked impossible to win,” Rose said, referring to his three missed cuts and failure to finish better than 37th in his first five starts of 2015. “I’m very happy to have turned my game around.”

Rose completed a 7-under 65 in the rain-delayed third round Sunday morning and closed with a 66 at TPC Louisiana for his seventh PGA Tour title. He finished at 22-under 266, a record total on the course southwest of New Orleans that has hosted the city’s PGA Tour stop 10 times since 2005.

The Englishman has won at least once in six straight seasons, the second-longest streak on the tour behind Dustin Johnson’s eight straight. He’s projected to jump from ninth to sixth in the world ranking.

Rose said his drastic improvement two weeks earlier at the Masters, where he tied for second, helped him in the Big Easy.

“I took my Masters performance with a huge amount of confidence,” Rose said, recalling in particular the sense of calm he was able to maintain down the stretch at Augusta National.

Playing aggressively on the soggy TPC Louisiana, Rose made six birdies in the final round and played the last 66 holes without a bogey.

“I’m pleased,” said Tringale, who was looking to become the eighth first-time winner in the last 11 years in New Orleans. “To finish one back is still a pretty good week.”

Boo Weekley, who led after the first round, finished third at 20 under, and Jim Herman and Jason Day, ranked sixth in the world, tied for fourth at 19 under.

Canada’s David Hearn finished at 18 under for a share of 6th with Daniel Berger.

When Rose sank his final putt, he punched his right hand high above his head and looked straight behind the green at roaring fans in the suite of one of his main sponsors, Zurich, which also sponsors the tournament.

He then took off his white cap whipped it across his body and later flexed his left arm to bring attention to the sponsor’s logo on his sleeve.

He had to wait about a half-hour before his closest pursuers completed their rounds, but allowed himself to soak up adulation from fans before the result was official.

Rose began the final round tied with Day for the lead at 16 under. But Day, who had to finish most of his third round Sunday morning, hooked his drive into trees lining the left boundary of the second fairway. On the next swing, his ball smacked a tree and bounced right back to him.

He wound up with a bogey on the par-5 hole that he birdied in first and third rounds. On 13, he left a 70-yard approach shot short of the green. He said hot, steamy conditions wore him down over the course of 32 holes.

“The early days and the hot days, and just the long days in general kind of finally caught up to me,” Day said. “I played great all week, but this final round just had a lot of mental errors.”

Rose made birdie putts beyond 10 feet on the par-5 seventh and par-4 eighth to improve to 19 under. That was good for the lead until Tringale, several holes behind, birdied the sixth, chipped in for eagle on the seventh and birdied the eighth to reach 20 under.

The course, carved out of a cypress swamp, was soggy from rain that had fallen for much of the past month, including heavy downpours that delayed parts of the second and third rounds.

There was standing water on the edges of some fairways and mud in well-worn spots. As players walked the course, their steps produced a sound similar to water being squeezed from a sponge.

Allowed to lift, clean and place their golf balls in the fairways and with no roll of any significance to be found, players swung aggressively and aimed approach shots pin-high.

With the top of the leaderboard tightly packed as Rose stepped to the par-3 17th, he showed no interest in playing it safe, even though the pin was placed to the left side of the green, near a bulkhead dropping down into a water hazard from which alligators looked on. Rose took out his 5-iron and belted a 210-yarder straight toward the pin, landing about 10 feet behind the hole, setting up his clutch birdie putt.

“It would have been easy to hit it 20, 30 feet right of that pin, but I kind of knew that – because I was three or four holes ahead of some of the other guys in contention – I knew they had birdie opportunities.”

On the par-5 18th, with water to the right, Rose unloaded a 295-yard drive down the middle, then smacked a 3-wood 243 yards just left of the green and chipped over a sand trap to set up what would be his winning putt.