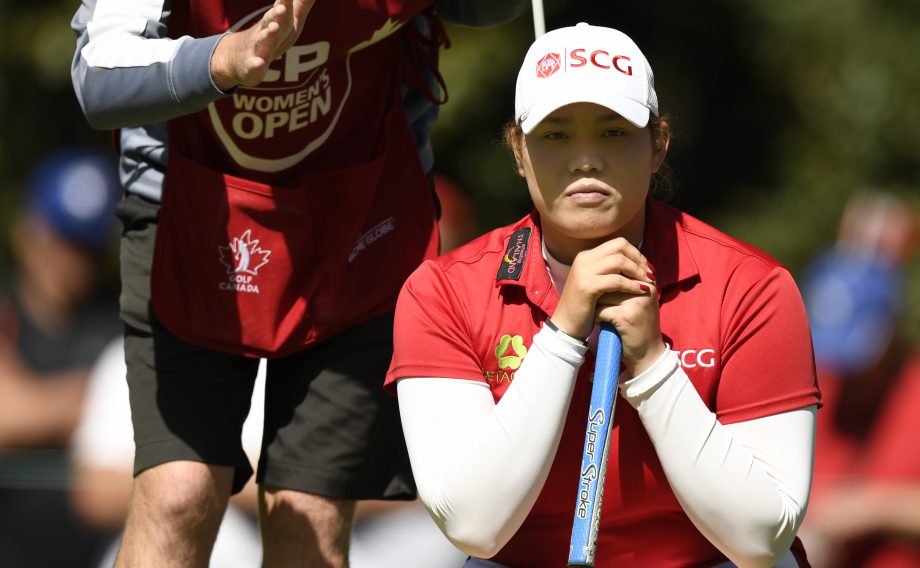 CALGARY – No driver, no problem for Thailand’s Ariya Jutanugarn.

Despite not carrying a driver in her bag, Jutanugarn shot a bogey-free 8-under 64 on Friday to move atop the leaderboard through two rounds of play at the CP Women’s Open.

“I hit my tee shots pretty good and I was calm on every shot, so I feel good,” said the 20-year-old Bangkok native, who’s alone in first place at 12 under after carding eight birdies on the Raven course of the Priddis Greens Golf and Country Club.

“Honestly, I don’t think it suits with my game. To me, it’s a little bit narrow and I can’t hit my driver.”

Not having the big stick didn’t cause any problems for Jutanugarn, who hit 14-of-14 fairways on Friday using either her 3-wood or 2-iron.

“Sometimes I feel more confident with my irons, so I feel like this one I’ve got to make sure it’s in the fairway, so it’s good enough,” said Jutanugarn, who is currently No. 2 in the Rolex women’s world golf rankings behind New Zealand’s Lydia Ko and just ahead of Brooke Henderson from Smiths Falls, Ont. “I mean some weeks I use my driver if it’s wide enough and if I need the distance, but this week I don’t need that.”

South Korea’s In Gee Chun birdied the 17th hole before draining a nine-foot putt for eagle on the 18th to shoot a 5-under 67.

“I had three bogeys today, but it was a really good finish on the 18th hole,” said Chun, whose two-day total of 9 under has put her in striking distance of accomplishing what she set out to do at the start of the four-day tournament. “My goal is top three this week, so I can try.”

Northern Ireland’s Stephanie Meadow followed up her round of 66 on Thursday with a 69 on Friday to pull into a tie with Chun for second spot.

Ko also shot 69 to put her in a five-way tie for fourth spot with Sei Young Kim, Hyo Joo Kim, Mi Jung Hur and Chella Choi, all of whom hail from South Korea.

“I played pretty solid the past few days,” said Ko, who has won the Canadian Open in three of the past four years including last year at the Vancouver Golf Club in Coquitlam, B.C. “There’s still a lot of golf to be played. Right now I feel like I’m playing solid, so it’s a good position going into the weekend.”

Choi finished up the final four holes of her first round early on Friday morning after play was suspended the night before due to darkness. She had the first round lead of 7-under 65, but fell out of top spot after shooting 71 during her second trip around the par-72, 6,622-yard layout.

Thailand’s Budsabakorn Sukapan shot 66 in Round 2 and is tied for ninth spot at 7 under with South Korea’s Amy Yang, Norway’s Suzann Petterson and a pair of Japanese golfers in Sakura Yokomine and Ai Miyazato.

Maude-Aimee Leblanc, of Sherbrooke, Que., sank a long putt from off the green on the 18th hole to finish her second round with an eagle.

“I know the greens are super fast, so I just know I had to roll it on the green and then the green was going to do the rest,” said Leblanc. “Fortunately I did the job and it’s a good way to finish.”

After carding her second straight score of 69, Leblanc is in a tie for 14th spot at 6 under with five other golfers including Hamilton’s Alena Sharp.

“It’s always good to see the Canadian flag on the leaderboard no matter where we are, but definitely this week,” said Sharp. “I know in the past we’ve done well as a group, the Canadians, so it’s nice to see halfway through we’ve got some people up there. Hopefully we can continue it on the weekend.”

Canada's @AlenaSharp on her solid year, nerves and more after Rd. 2 of the #CPWO.https://t.co/vugZY6UncJ

Calgary’s Jaclyn Lee followed up the 69 she shot in Round 1 with a 70 to put her in a tie for 20th place at 5 under, one shot ahead of Henderson, who carded a respectable round of 4-under 68.

“I’m feeling pretty good,” said Lee, who’s playing in her first LPGA event as an amateur. “These past two days have been really fun, incredible ? just a great experience. It’s been a bonus on top of that to play well.”

Quite the #LPGA debut for @JaclynLee57. @TheGolfCanada Am. Team member member is 5-under thru 36 holes at the #CPWO.https://t.co/YwQqY255E4

Quebec City’s Anne-Catherine Tanguay was the only other Canadian to qualify to play on the weekend as her two-day total of 1 under put her right on the cut line with a host of other players.

Toronto’s Rebecca Lee-Bentham along with Brittany Marchand, of Orangeville, Ont., and Jessica Wallace of Langley, B.C., all finished at even par to miss the cut by one shot.