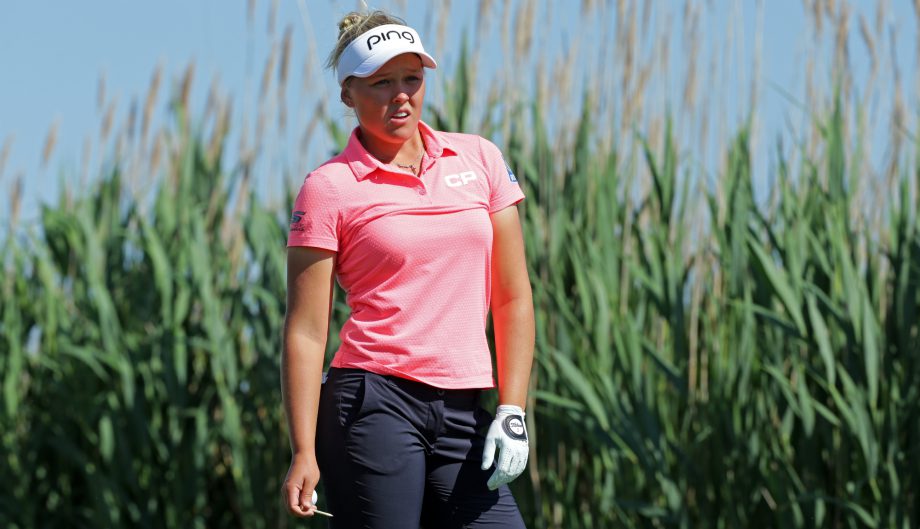 Ariya Jutanugarn took the No. 1 spot in the world ranking without hitting a shot, and Paula Creamer and In-Kyung Kim topped the ShopRite LPGA Classic leaderboard Saturday.

Taking the week off, Jutanugarn replaced Lydia Ko atop the ranking when So Yeon Ryu missed the cut. Ko, also skipping the event, was guaranteed to lose the top spot to Jutanugarn or Ryu, and Jutanugarn got the position when Ryu failed to finish solo third or better.

Creamer and Kim each shot a 4-under 67 in windy conditions to reach 9 under at Stockton Seaview, while two-time defending champion Anna Nordqvist followed her opening 64 with a 71 to drop two strokes behind along with Moriya Jutanugarn – Ariya’s older sister – and Jeong Eun Lee.

Ryu had her second straight 74 to miss the cut by three strokes.

The 30-year-old Creamer won the last of her 10 LPGA Tour victories in 2014 in Singapore when she made a 75-foot eagle putt on the second hole of a playoff with Azahara Munoz.

“I feel good. I feel prepared,” Creamer said. “I knew there was a time I was going to kind of breakthrough. It just shows these last two days have been good golf. We’ll continue. Whatever happens tomorrow happens, but I feel like my golf game is in a good place.”

Kim won the Reignwood LPGA Classic late last year in China for her fourth tour title. She’s making only her sixth start of the season after an injury when she fell down stairs.

“This winter I didn’t have any break, I needed some time to get ready for the summer,” Kim said. “I’m really happy to get back.”

Nordqvist had two birdies and consecutive birdies on Nos. 11 and 12. She’s trying to match fellow Swede Annika Sorenstam’s record of three victories in the event.

“Overall, I feel like I played a little bit better than I scored,” Nordqvist said. “I’m still in it. It was just a hard afternoon with the wind.”

ICYMI: Watch highlights from round 2 of the @ShopRiteLPGA!

Nordqvist won the Founders Cup in Phoenix in March for her seventh LPGA Tour title, a homecoming victory for the former Arizona State star.

Brooke Henderson is the only Canadian to make the cut and is tied for eighth. The Smiths Falls, Ont., native shot a 69 and is 5 under, four shots back of Creamer.

Moriya Jutanugarn and Lee each shot 70.

India’s Sharmila Nicollet shot a 76-78 to miss the cut after winning a fan Twitter poll to get the final sponsor exemption.