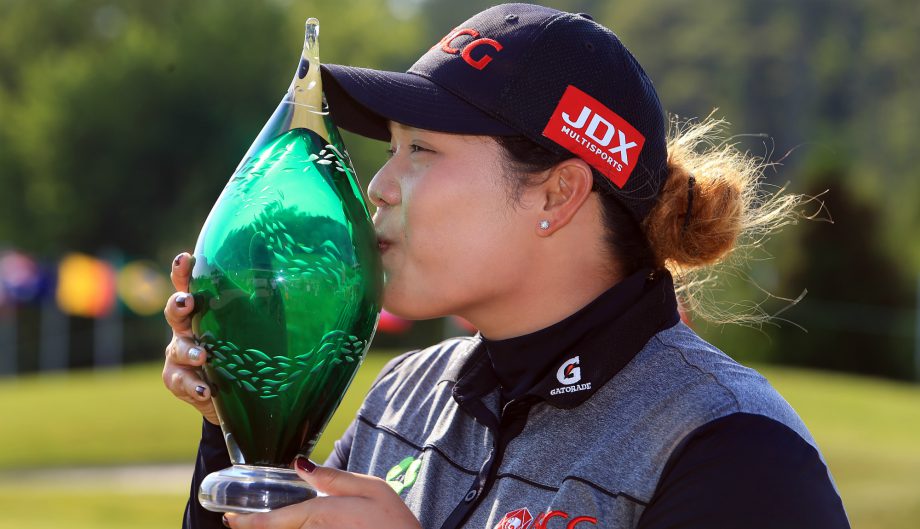 Ariya Jutanugarn was seated by the scorer’s tent snapping selfies with In Gee Chun on Sunday, thinking there was little chance they would return to the course for a playoff at the Manulife LPGA Classic.

A short time later, Jutanugarn was posing for pictures as the tournament champion.

Lexi Thompson buckled down the stretch and missed a four-foot putt to win in regulation, forcing her to return to the 18th tee with Jutanugarn and Chun for a playoff hole.

Jutanugarn found the rough with her drive but her approach was pin-high and she drained a 25-foot birdie putt for her first victory of the season.

The 21-year-old from Thailand is a virtual lock to move up one position Monday and knock Lydia Ko off her perch as the world’s top-ranked women’s player.

Jutanugarn, who won five times last year, had three birdies over a four-hole stretch around the turn at Whistle Bear Golf Club. She closed with six straight pars for a 3-under-par 69 that left her at 17-under 271.

Thompson, meanwhile, started the day with a one-shot lead and led by four strokes after a birdie on No. 9. Four bogeys on the back nine did her in, with the final one coming when she three-putted on the 18th hole.

“I had like a five-footer, six-footer, and about a four-footer and missed them all,” Thompson said of her last three holes. “If I made those I would have won, but that’s golf I guess.”

Conditions were warm and blustery for the second straight day and preferred lies remained in effect. Thompson finished with an even-par 72 while Chun had a 70.

Brooke Henderson of Smiths Falls, Ont., was the top Canadian. She finished six strokes back in a tie for 11th after a 71.

"I really appreciate all the support I got this week – the crowds were amazing” – @BrookeHenderson finished T11 @ManulifeClassic pic.twitter.com/6B27P8JWNx

Hamilton’s Alena Sharp started the day three shots behind Thompson but was unable to make a run. She had a double bogey on her final hole and finished at 10 under after a 76. Sponsor invite Brittany Marchand of Orangeville, Ont., struggled to an 81 (285).

Sharp, who had a share of the 36-hole lead, was looking for her first career victory in 246 career LPGA Tour starts. Henderson, meanwhile, had an uneven round with an eagle, six bogeys and six birdies.

“Obviously I’m a little bit disappointed, but (tied for) 11th, I can’t complain too much,” Henderson said. “I feel like my game is so close to being so great.”

Jutanugarn birdied three of four holes over the turn and closed with six pars in a row. She earned US$255,000 of the $1.7-million purse for the victory.

Jutanugarn is the 13th different winner on the LPGA Tour this season. Her last victory came at the 2016 Canadian Pacific Women’s Open.

Worth a look ==> Final Round highlights from Canada & @ManulifeClassic where Ariya Jutanugarn won in a playoff:https://t.co/OqxIPHXOqY pic.twitter.com/8O8Tld0BnX

Marchand, a full-time member of the Symetra Tour, was making her first career weekend appearance at an LPGA Tour event. She tumbled from a tie for ninth place into a tie for 46th.

The last Canadian to win on home soil was Jocelyne Bourassa at the 1973 La Canadienne Golf Championship.

Manulife will not return as sponsor next season. The LPGA Tour has said it hopes to return to the area and the search is underway for a new title sponsor.