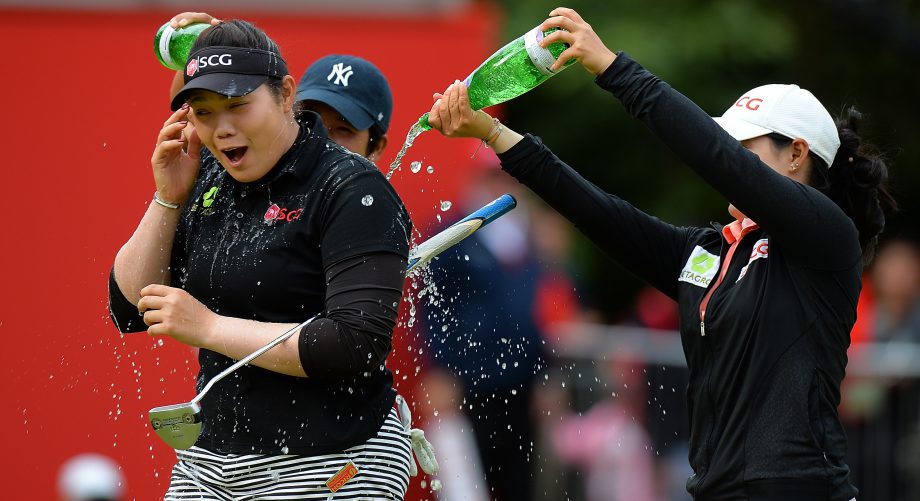 The 20-year-old Jutanugarn closed with an even-par 72 for a three-stroke victory over American Mo Martin and South Korea’s Mirim Lee. Jutanugarn became the first major winner from Thailand.

“I think it’s really important for me and for Thai golf, also,” Jutanugarn said. “Like my goal, I really want to win major and I did. I’m really proud of my achievement because I accomplished my goal this year.”

She will be one of the favourites at the Rio Olympics.

“I’m really looking forward to it,” Jutanugarn said. “I can’t wait. I’m really excited about that.”

She finished at 16-under 272 on the Marquess Course, the hilly, forest layout that is a big change from the usual seaside layouts in the tournament rotation.

Lee closed with a bogey for a 73. She matched the tournament record Thursday with an opening 62.

“I really had fun,” Lee said. “That was the most important thing. I had fun throughout the whole thing.”

Alena Sharp of Hamilton was the top Canadian. She shot a 71 for a share of 31st place. Brooke Henderson of Smiths Falls, Ont., tied for 50th while Maude-Aimee Leblanc of Sherbrooke, Que., finished in 69th place.

“That was my heart and my soul out there,” Martin said. “That’s all I had. I gave it everything I could.”

The long-hitting Jutanugarn had a six-stroke lead over Lee at the turn, but Lee picked up five strokes on the next four holes with three birdies and Jutanugarn’s double bogey on the par-4 13th.

Jutanugarn made a 25-foot birdie putt on the par-3 17th to take a two-shot advantage to the final hole. Jutanugarn closed with a par, and Lee dropped a stroke.

Jutanugarn, the long-hitter who leaves driver out of the bag and hammers 3-wood and 2-iron off the tee, broke through four months after blowing a late lead in the first major championship of the year. In early April in the ANA Inspiration in the California desert, Jutanugarn – at the time, best known for blowing a two-stroke lead with a closing triple bogey in the 2013 LPGA Thailand – bogeyed the final three holes to hand the title to Lydia Ko.

Jutanugarn put the hard lessons to use in May, winning three straight events to become the LPGA Tour’s first Thai champion. And Saturday at Woburn, she shot a bogey-free 6-under 66 to pull two strokes ahead of Lee and break the tournament 54-hole record of 201.

Jutanugarn is projected to jump from sixth to third in the world ranking Monday. A year ago, she was 52nd.

Stacy Lewis was fourth at 11 under after her third straight 70.