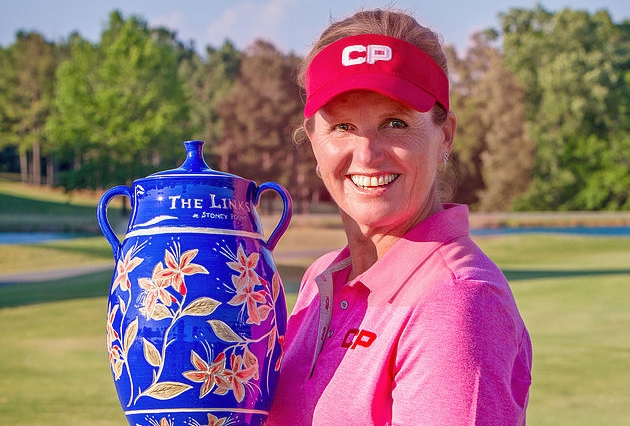 Kane carded a one-under score of 71 in the 18-hole event to clip McGann, who finished at even-par 72 at The Links at Stoney Point.

“I’m excited because I’m playing good golf,” said Kane, who opened the round with a bogey, but answered with birdies on holes 2 and 3.

The PEI native birdied No. 7 and made the nine-hole turn at two under, taking a two-shot lead into the back nine.

After struggling in the wind and ballooning to two over on the front nine, McGann fought back with three birdies and a bogey on the back nine holes to briefly hold a clubhouse lead.

Kane had her own problems on the par-4 11th hole when her 5-iron approach shot hit the green’s top tier, spun and rolled all the way back off the green. She three-putted for bogey, but countered with a birdie from five feet on the par-3 13th hole.

“That was a scary, downhill putt,” she said of the birdie on No. 13. “I used all of the cup.”
Kane’s final hiccup came on the last hole, where she drove into a fairway bunker, flew the 18th green, chipped and missed a 10-foot putt for par. Even with a bogey, she was able to salvage the win.

“I’m just trying to play and have fun,” said Kane, who has four LPGA wins and four wins on The Legends Tour.

“I hit the ball as hard as I can and if I make a putt, great, and if I don’t, it’s not the end of the world. I was telling some of the Symetra Tour players I wish I had thought that way six or eight years ago.”

Legends Tour members Cindy Figg-Currier, Christa Johnson and Cathy Johnston-Forbes tied for third, each at 2-over 74, while Barb Mucha and Kris Tschetter tied for sixth at 3-over 75.

Twenty-four members of the Legends Tour played the inaugural 18-hole tournament alongside Symetra Tour players during their final round.

Madelene Sagstrom of Sweden won the Symetra Tour’s event with a final-round score of 2-over 74 and a 72-hole total of 10-under 278.