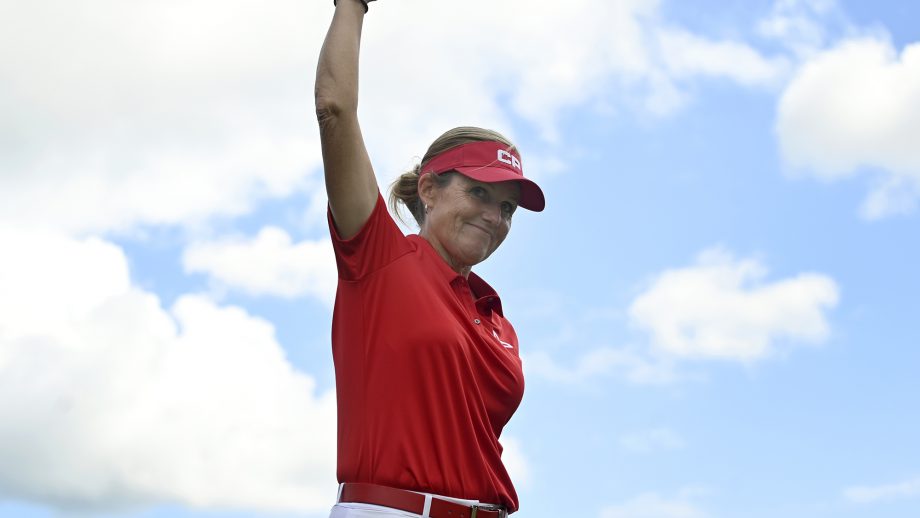 AURORA, Ont. – Watching Canadian Golf Hall of Famer Lorie Kane work the crowd at the CP Women’s Open, you’d have no idea she was coming off one of the worst performances of her pro career.

Kane was all smiles as she chatted with fans, shot promotional videos and watched some of the third-round action by a CP mini-train set up by the 12th tee at Magna Golf Club.

She struggled mightily in her record 29th career appearance at the tournament with an 87-80 scoreline that left her last in the 153-player field at 23-over-par 167.

“This is a humbling game,” Kane said. “It can take everything you’ve got and beat you up bad. But then you know, I get to come back, I have the fan support. That’s the part that I’m still amazed at – that people care.”

One of the most personable and engaging athletes going, Kane is a beloved figure in the Canadian golf community. She feels the support from fans at every turn when she plays in this annual tournament.

Kane said she still has the drive to test herself against the best players on the LPGA Tour and also enjoys giving back in her role as ambassador for the CP Has Heart community investment program.

“I’m probably on the back nine of playing regularly,” Kane said. “My relationship and my partnership with CP is extremely important to me. I’m hoping that I can continue to help them grow the heart health campaign and be a part of the CP Women’s Open until I probably don’t want to play.

“But next year, going to Shaughnessy (in Vancouver), is huge.”

Kane, a four-time winner on the LPGA Tour, plays a part-time competitive schedule that includes some Legends Tour stops. Despite the limited action, she was still surprised at her first-round struggles.

“I knew that I was going to be up against it a little bit,” she said. “I haven’t had many tournament rounds under my belt to date. I had an injury this past winter that stopped me from going down to Australia. I normally play six to eight weeks down there.

“I had low expectations but by no means did I think I would stumble like I did on Thursday.”

Kane went eight holes in a row with either a bogey or double-bogey in her opening round. She scored better on Friday despite hitting only five of 18 greens in regulation.

“It’s been a while since I’ve made it to the weekend,” she said. “I think the biggest thing for me is I don’t want to feel like I’m playing ceremonial golf because if I do that, then I’m taking up a spot. I want to be competitive and I want to give my best.

“Not only for myself but for Canadian Pacific because without the railway, women’s golf wouldn’t be where it is in this country.”

Kane, 54, is hoping to get more competitive rounds under her belt as she prepares for the Senior LPGA Championship in mid-October. She’ll likely play next week at the Cambia Portland Classic and also has pro-am and team events on her upcoming schedule.

Kane has been the low Canadian at this tournament on nine occasions – eight outright and one tie – with her best result coming in 2001 with a third-place tie. It’s likely that she will receive exemptions to participate in the CP Women’s Open for as long as she wants to continue playing at the event.

Kane has 99 career top-10 finishes and has earned US$6.95 million since turning pro in 1993. She previously shared the tournament’s all-time appearance record with JoAnne Carner.

“I think if you ask any athlete, we’re always thinking forward,” Kane said. “We never go back, because you’re supposed to be living in the moment. I have revisited my accomplishments in my own little way and I’m proud of myself.

“But I’m also annoyed with myself that I can have days like I had on Thursday and even yesterday. I did clean some stuff up but still didn’t have my best. (But) yeah, I’m proud of what I’ve done.”