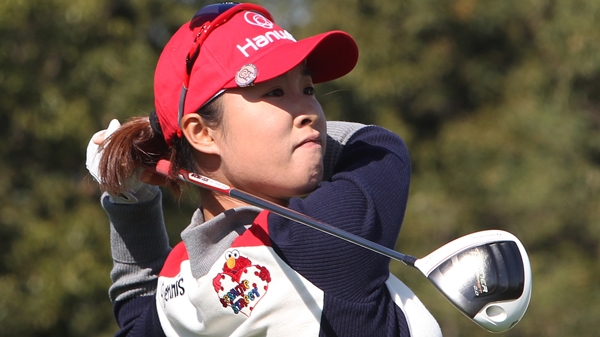 INCHEON, South Korea – Haeji Kang shot a 5-under 67 on Thursday to take a two-stroke lead over five players, including three fellow South Koreans, after the first round of the LPGA’s KEB-Hanabank Championship.

Lee Il-hee and defending champion Amy Yang shot 69s along with another South Korean, Mirim Lee. Australian Minjee Lee and Catriona Matthew of Scotland were also tied for second on the wind-swept Ocean Course at the Sky72 Golf Club.

“I think looking back on my game overall today, I did very well,” Kang said. “Especially in the first nine holes, there were a couple of risks of actually bogeying some holes but I was able to stop and save with my putting.”

There were eight golfers tied for seventh another shot back, including No. 4-ranked Suzann Pettersen of Norway and American Brittany Lincicome.

Second-ranked Inbee Park, who could move to No. 1 with a win in the absence of top-ranked Stacy Lewis of the United States, was a further shot back with a 71. Park married swing coach Gi Hyeob-nam on Monday in Seoul.

“Whenever I go to a tournament, I’m just very quiet and just doing my own thing,” Park said. “This week I really tried to approach it the same way. Obviously it was a busy week and I didn’t get in a practice round.”

Lincicome was pleased with her round given the tough conditions.

“Obviously nobody can prepare for the wind that was today,” she said. “But I think today was more just staying calm and knowing that scores were not going to be super low and just try to be patient.”

Eight of the top 10-ranked players are competing in the South Korean event.

U.S. Women’s Open champion Michelle Wie opened with a 76. She’s making her first start since withdrawing during the first round of the Evian Championship in September after reinjuring a stress fracture in her right hand.

Women’s British Open winner Mo Martin had a 78 in her return from a thumb injury. Fellow American Paula Creamer shot 81.

Martin played her round in a splint because of her injury and said she had to adjust her grip.