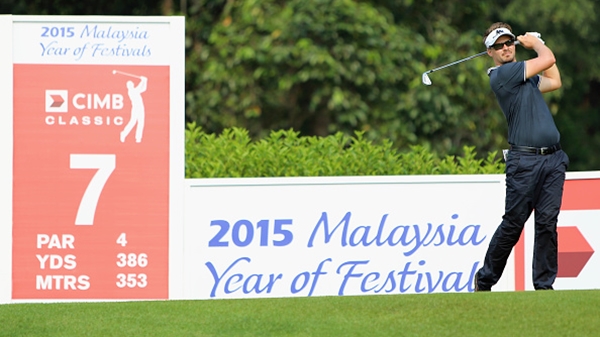 KUALA LUMPUR, Malaysia – Rikard Karlberg of Sweden birdied his last two holes for a 7-under 65 Thursday to take a two-shot lead after the opening round of the CIMB Classic.

Karlberg also had five birdies on the front nine in a bogey-free round at the Kuala Lumpur Golf and Country Club. After a round interrupted by a two-hour delay for thunderstorms, a trio of players were two shots back – Americans Billy Hurley III and Brian Stuard plus Angelo Que of the Philippines.

Karlberg, among the top 10 Asian Tour players who qualified for the jointly sanctioned PGA Tour event, said he benefited from a more relaxed approach after struggling with lingering viral infection that has affected his season.

“It gets you a little bit stressed out,” Karlberg said. “I just stopped almost enjoying the game. I was a little bit frustrated before the two last tournaments coming into this week.”

The Swede, who splits his time between the Asian and European Tours, is making only his third PGA Tour appearance after missing the cut twice in the U.S. Open.

“Just enjoy it and have fun out there made a big difference to me,” he said. “So I haven’t really thought about it as a big event.”

Eight players were tied a stroke further back, including defending champion Ryan Moore, who finished his round with four successive birdies.

Veteran Davis Love III sank an eagle at the 10th to also shoot a 68, along with American compatriots Kevin Streelman and Jeff Overton.

Sergio Garcia, the top-ranked player in the field, had four birdies on his outward nine en route to a 69 to sit tied for 13th with nine others.

Stuard had five birdies on his front nine – including four straight from the 14th after starting on the 10th – but also had two bogeys. His second nine was smoother with birdies on No. 1 and No. 8, putting him in position to turn around a poor stretch that has seen him miss the cut at his previous three tournaments.

“I’ve played a couple good rounds and then I’ll have a bad round, so I’m excited to play well to start with and hopefully I can keep it going,” Stuard said.

Que had six birdies on his first nine holes, benefiting from some superb approach play, and said greater trust in his shot selection had turned around his performance in recent weeks.

Moore, who won last year’s event after a playoff, again made an impressive start after opening with a 63 in 2013.

“Early in the round it was a little up and down and I made some great par savers that kept myself in it,” Moore said. “I made a nice 20-25 footer to finish off – that putt was in the whole way – so it was nice hitting good putts like that and seeing them go in. That never hurts your confidence.”

Garcia was relatively content with his round despite several narrowly missed putts.

“It was one of those day where instead of lipping in, they seemed to lip out, and I probably had at least four or five putts that looked like they were going to go in and didn’t,” Garcia said.

Streelman was among several of the American players who struggled with the steamy conditions.

“Man, it really wipes you out,” Streelman said. “We’re not too used to his over in the U.S. and this is going to be a battle all weekend.”

Mike Weir opened with a 1-0ver 73 and was tied for 49th and is looking to make his first cut of the 2014-15 PGA Tour season after missing the cut at the Frys.com Open.