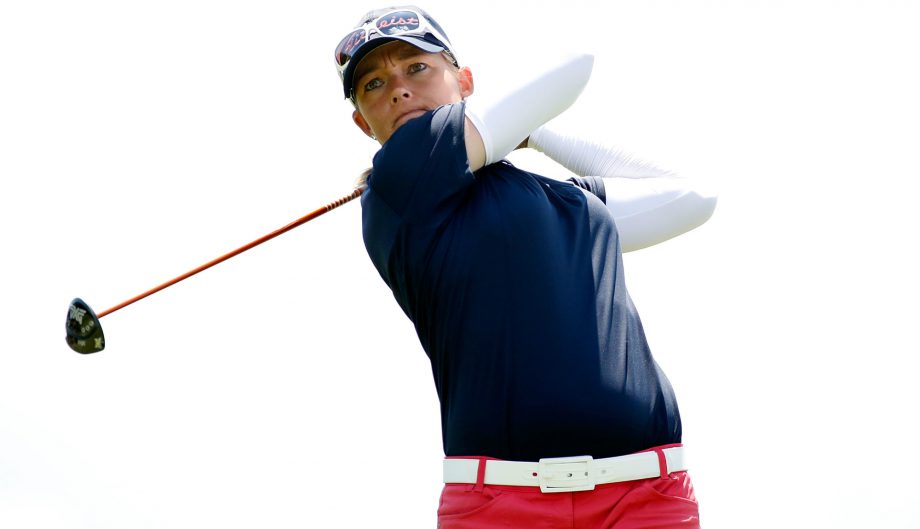 Katherine Kirk shot a career-best 9-under 63 on Friday to take a three-stroke lead in the weather-delayed second round of the inaugural Thornberry Creek LPGA Classic.

Kirk, a 35-year-old Australian who has two victories in 14 years on the LPGA Tour, played the back nine in 7-under 29 at Thornberry Creek, the Oneida Nation-owned resort near Green Bay. She eagled the par-5 13th and hit a hybrid to 4 feet on the 196-yard, par-3 17th for her final birdie of the day to finish at 13-under through two rounds.

“My husband was up here Monday and Tuesday with me, and he said to me last night, ‘Someone could easily shoot 8 under around here,”’ Kirk said. “I’m just happy it was me, or 9 (under), I guess.”

Kirk finished her round before a 3 1/2-hour delay for lightning in the area.

“Perfect conditions, really,” she said. “We only had a little bit of breeze, but the greens for us are softer than usual, so we’re able to basically throw darts at it, and I think that’s why you’re seeing so many low numbers out there.”

Jaye Marie Green birdied eight of her final 12 holes to shoot 66 and was three shots back. Sandra Gal of Germany was also 10 under through 13 holes when play was suspended because of darkness.

Green, 23, who played college golf at Florida and has never won on the LPGA Tour, had her brother, Matt, on the bag.

“Everything was clicking, and then my brother is cool to caddie for me,” Green said. “He helps keep me calm when I don’t want to kill him.”

Moriya Jutanugarn of Thailand was four shots back after a second-round 68. Her younger sister, second-ranked Ariya Jutanugarn, withdrew with a shoulder injury on Friday, one day after struggling to a 78.

South African Ashleigh Buhai (66), South Korean Ilhee Lee (68) and Pavarisa Yoktuan of Thailand (68) were also four shots back. Christina Kim, Karine Icher, Amelia Lewis and Madeleine Sheils were another shot behind, along with Cristie Kerr, who had five holes left to play.

“I’m trying to tighten up my putting a little bit because this is a putting match out here,” Lewis said. “Whoever can make the putts is going to win this thing.”

Top-ranked So Yeon Ryu, No. 3 Lexi Thompson and No. 4 Lydia Ko are among those taking the week off before the U.S. Women’s Open next week at Trump International in New Jersey.

In Gee Chun, the highest-ranked player remaining in the field at No. 5, was 5 under through 12 holes. Eighth-ranked Brooke Henderson was also 5 under after a 68. Henderson finished runner-up to Danielle Kang in last week’s KPMG Women’s PGA Championship.

First-round co-leader Laura Gonzalez Escallon made a quadruple-bogey 8 on the par-4 18th and was in danger of missing the cut.