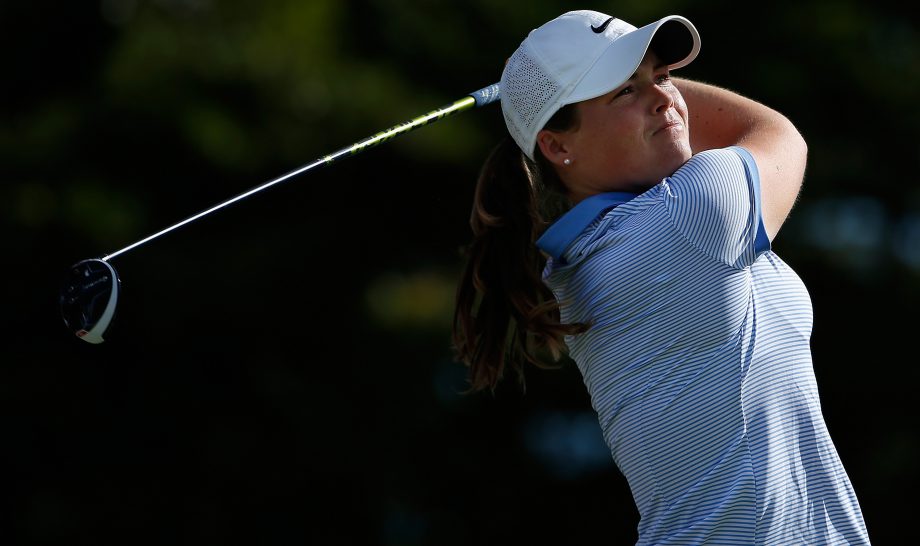 KAPOLEI, Hawaii – Katie Burnett chipped in for birdie from 75 feet on the par-4 18th Friday for a 5-under 67 and a one-stroke lead in the Lotte Championship.

Winless in 59 career starts on the LPGA Tour, the 26-year-old Georgia player had her second straight bogey-free round to take a 13-under 203 total into the final round at Ko Olina.

“I’m from the coast so I’m used to the wind,” Burnett said. “I’ve been home for two weeks and it was really windy at home, so I have pretty much been working on a pinch shot or three-quarter shot so it doesn’t get so affected by the wind. Been doing that with my driver.”

Burnett’s only top-10 finish on the LPGA Tour came in 2014 at Ko Olina when she tied for ninth.

“I’ve had some success here,” said Burnett, ranked 195th in the world. “I really like the golf course. I think it sets up really well for my game. … To me, if you’re not hitting like a really good three-quarter shot or really in command of your ball flight, the wind can wreak havoc on the ball.”

Burnett began the day two strokes behind second-round leader Minjee Lee. The former University of South Carolina player birdied the par-5 fifth, added another on the par-4 11th and hit wedges close to set up consecutive birdies on the par-5 14th and par-4 15th.

“It was a solid round,” Burnett said. “I just tried to stay patient. I had a few opportunities early that I kind of like let slip by. … I just really focused on the back nine, just staying with my process and being patient and knowing that eventually I would make a few birdies.”

Su-Yeon Jang was second after a 67 in calmer conditions after the brisk tradewinds dropped dramatically. Playing on a sponsor exemption, the 21-year-old South Korean player is coming off a victory last week in the Korean LPGA event sponsored by Lotte – a win that earned her a spot next year at Ko Olina.

“Just trying to take every moment to enjoy and think of it as a learning opportunity,” Jang said. “I have not put too much pressure. It’s been a great learning experience for me.”

U.S. Women’s Open champion In Gee Chun and Moriya Jutanugarn were 10 under. Chun had a 65, and Jutanugarn shot 68. Defending champion Sei Young Kim was another shot back after her third straight 69.

Lee shot a 74 to drop into a tie for sixth at 8 under. She and Lizette Salas (73) were the players among the top 44 to shoot over-par rounds.

Top-ranked Lydia Ko, coming off consecutive victories in California, was 11 strokes back at 2 under after a 71.

Jang, an eight-time winner on the Korean LPGA who is making her first start in the United States, birdied the final four holes on the front nine. She dropped a stroke on the par-3 12th, birdied the next three and made another bogey on the par-3 16th.

Chun eagled the par-5 13th, hitting a 3-wood from 230 yards to 20 feet. She’s making her second start after sitting out a month because of a back injury. She was hurt when she was struck by a hard-case suitcase that rival South Korean player Ha Na Jang’s father dropped down an escalator at the Singapore airport.

“I am about 90 percent of where I should be,” said Chun, coming off a second-place tie in the two weeks ago in the ANA Inspiration. “Doesn’t necessarily impact my swing. Doesn’t hurt when I’m swinging. Just if I’m sitting for a long time it does hurt a little bit. I think the last couple days I did feel a little bit of pain, so hopefully I’ll look into that today and get ready for tomorrow.”

Chun will play in the final group Saturday with Burnett and Jang, her high school classmate.

Kim bogeyed the 16th and 17th holes to drop back.

“Without that I play well today,” Kim said.

Last year at Ko Olina, she won by holing out from 154 yards for eagle on the first hole of a playoff with Inbee Park. Kim forced the playoff by chipping in for par on the final hole.

“I keep the like aggressive play,” Kim said about the final round. “Even if the wind strong, I try to.”