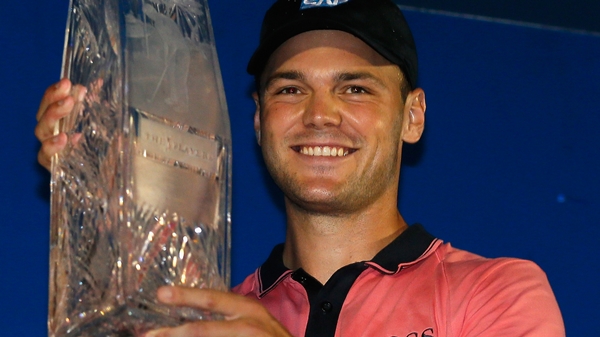 PONTE VEDRA BEACH, Fla. – Martin Kaymer produced one of the most unlikely pars on the 17th green at the TPC Sawgrass without ever going in the water. It carried him to a one-shot victory Sunday in The Players Championship that was emotional in so many ways.

Kaymer nearly blew a three-shot lead after a 90-minute rain delay until he holed a 30-foot par putt on the famous island green. He got up-and-down with his putter from short of the 18th green for one last par and a 1-under 71.

Furyk closed with a 66 – he had to wait after the rain delay to rap in a 3-foot par putt – and it looked as though it might be enough to force a playoff, or even win outright when the 29-year-old German began to crumble. Furyk had to settle for a runner-up finish for the second straight week.

Jordan Spieth, tied with Kaymer going into the final round, made his first bogey of the tournament on the fifth hole, and plenty more followed. He closed with a 74.

The typical stress that Sawgrass brings on Sunday was contained to the final hour, and it was almost more than Kaymer could take. The German made double bogey from an aggressive play behind a pine tree on the 15th. He nervously chose putter from a collection area on the par-5 16th that cost him a chance at birdie.

Nothing could top the 17th hole, the most exciting on the Stadium Course.

Kaymer had a one-shot lead. His tee shot cleared the water and landed on a mound just over the bunker, but it mysteriously spun hard back toward the front of the green and looked as if it might go into the water until it settled into the clumpy collar a foot from the bulkhead. His chip was weak, and he still had 30 feet down a ridge with a sharp swing to the right. He made the putt, pumping his fist in a rare show of emotion.

His putt from the fairway on 18 settled 3 feet behind the hole, and Kaymer was as much relieved as excited when he knocked it in.

A former world No. 1 and major champion, Kaymer nearly choked up when asked about winning on Mother’s Day. His mother, Rina, died of cancer in 2008 shortly after Kaymer won the BMW International Open in Germany.

He has a sunflower – her favorite flower – on his golf bag.

“My mother was always there to be affectionate and show us love,” Kaymer said in a taped interview with NBC Sports. “When my mom passed away, that stopped. We had enough when we were younger. Mother’s Day is always a nice day. I hope a lot of kids show their mothers we love them.”

Interviewed on the 18th green, so dark that the clubhouse was glowing from the outdoor lights, Kaymer said brother Phillip sent him a text that morning which he described as “very emotional.”

Kaymer finished at 13-under 275 and joined an elite group by winning the biggest event on golf’s strongest tour. Tiger Woods, Phil Mickelson and Adam Scott are the only other players to win a major, a World Golf Championship and The Players Championship.

Sergio Garcia made a strong run until he hit into the water on the par-5 11th and lost momentum by missing too many putts. He closed with a 70 to finish alone in third at 11 under.

For the 20-year-old Spieth, it was another lost opportunity. He went 58 consecutive holes without a bogey at Sawgrass until dropping a shot at No. 5. Spieth still was tied for the lead approaching the turn when Kaymer pulled away.

He was humming along until the horn sounded to stop play. When he returned, it all started to go wrong. But he held his nerve – he spoke earlier in the week about trying not to be a “wimp” – and produced an important win.

It was the 14th victory worldwide for Kaymer, ended an 0-for-29 drought. His last win was at the Nedbank Challenge in South Africa at the end of 2012, right after he delivered the crucial point for Europe in its Ryder Cup comeback. Kaymer was No. 1 in the world in February 2011 until he wanted to retool his swing to be able to hit a greater variety of shots. He needed all of them Sunday.

David Hearn tied for sixth, just four shots back of champion Kaymer. The Brantford, Ont. native climbed two spots Sunday after a 2-under par 70. He finished at 279 with four others including Rory McIlroy, Lee Westwood, Francesco Molinari and Jimmy Walker.