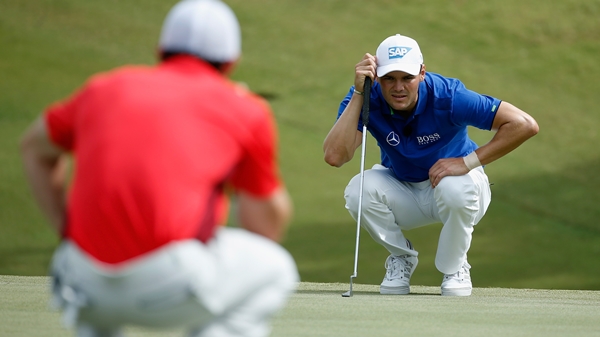 SOUTHAMPTON, Bermuda – U.S. Open champion Martin Kaymer made an eagle and drove the 10th green to set up a two-putt birdie for a 6-under 65 and a two-shot lead over Masters champion Bubba Watson in the PGA Grand Slam of Golf.

British Open and PGA champion Rory McIlroy wasted a fast start with a pair of three-putt bogeys for a 69. Jim Furyk, the alternate at this 36-hole exhibition for the year’s four major champions, was seven shots behind after a 72.

The final round is Wednesday at Port Royal.

Kaymer had a two-shot lead over McIlroy approaching the turn. McIlroy fell back with his three-putt bogeys, while Kaymer drove the green on the 355-yard 10th hole that bends to the left. The German dropped only one shot at the par-3 13th.